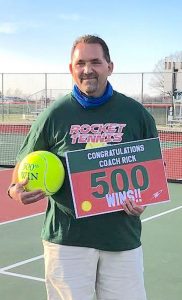 OAK HARBOR — When Rick LaFountain started coaching tennis, his knowledge of the sport was limited and he probably didn’t know that he would wind up coaching for such a long time.

For his efforts, LaFountain was rewarded when he reached an incredible milestone and notched his 500th victory last week in Oak Harbor’s 4-1 win over Fostoria.

It was the work of a man who has coached for decades at Oak Harbor and Fremont Ross, and for one season with St. Joseph Central Catholic.

“It’s been fun to look back and think of the great, young kids that I coached. Hopefully I had a positive influence, hopefully they think positively of me and the times we had. I guess I’m more of a product of longevity, I had a lot of really good players and really good kids,” said LaFountain. “I hope I have another 100 wins or so. I had a lot of really good athletic directors given me a lot of support — from Bill Hubans all the way up to Drew Grahl a few years ago and now Dan Hoover, who is doing a great job at Oak Harbor.

“My kids wanted to go to school in Oak Harbor and Drew Grahl was nice enough to let me come back and coach.”

LaFountain is quick to credit others for helping him gain knowledge and a greater appreciation for the sport. Gil Ravas and Sue Badertscher played a key role in helping him grow as a young coach.

“Gil was such a great guy. I learned a lot about tennis from him. He helped me out a lot my first few years of coaching. I had never taken a lesson in my life from anybody, and he taught me a lot of the drills, the strokes, and he had a lot of patience to work with the kids. He was always a volunteer,” said LaFountain. “He was like a grandfather figure for many of the kids. He could play tennis very well in his 60s. He taught me a ton about the game of tennis.

“Sue Badertscher was the Fremont Ross coach when I started at Oak Harbor. I’d go and tell her about our matches, and she gave me a lot of tips. That was before I had even met Gil.”

He oversaw a Little Giants boys team that won three consecutive Great Lakes League titles from ’97-’99. One of his best players, Pete Scranton, qualified for the state tournament in 2000.

“He was one of my favorite players. He’s doing great now, he’s a lawyer, and just a super young man,” said LaFountain. “He’s definitely one of the best players I’ve ever coached, and his mom and dad were fantastic people. I had a bunch of great athletes at Ross that hated to lose.”

One of his best teams at Oak Harbor was in 2009. Unfortunately, the Rockets lost, 3-2, in both matches to Port Clinton, who won the Sandusky Bay Conference.

“Port Clinton had a foreign-exchange student who was really good and we lost, 3-2, to them twice,” he said. “We had Greg, Bobby Lochotzki, Derek Witt and Cliff Goetz. We would’ve won the league almost any other year. One of our very best teams would’ve been last year, which we didn’t have (because of Covid-19). We had Nate Mansor and Brenan Ish, and we would’ve had a shot at being a league champion.”

A teacher by day, LaFountain is in his 32nd year at Ross. He teaches primarily freshmen, and this year he is teaching social studies, world history and World War II.
LaFountain is a fantastic coach, but he’s an even better father. His two children, Greg and Ashley, are very successful. Greg, who graduated from Oak Harbor in 2011, works as a science teacher at Lake High School while Ashley is finishing up medical school at Wright State University’s Boonshoft School of Medicine.

Ashley, who graduated from Oak Harbor in 2013, will be doing her residency at St. Vincent Medical Center in Toledo. Both earned bachelor’s degrees from the University of Toledo.

Both Greg and Ashley are arguably the greatest tennis players in Oak Harbor history. The duo still hold records to this day, and Ashley qualified for the state tournament four times. Greg currently works as an assistant coach with his wife, Jacqueline, under his father while Ashley comes to practice when she’s in town.

“I think they hung around tennis quite a bit, they would come to my matches and watch the kids play when they were little. They would stand around me and listen to some of the things I was saying. Maybe that rubbed off on them. They work hard, they took a lot of lessons, and that kind of helped me learn. I would listen when they had lessons,” said LaFountain.

“Bob Krueger and Pat Ortner were two pros who taught Greg and Ashley. Pat was out of Baywinds Athletic Club in Sandusky and taught Ashley. He passed away when Ashley was a freshman. He was a great guy, a reason why so many kids in the SBC wound up being so successful. Bob was a long-time coach at St. John’s and coached at Notre Dame Academy, and he worked at many of the tennis clubs. He passed away not long after Pat.”

Ashley was kind enough to put together a tribute to her father, a present that she gave to him during Easter weekend.

“Last Friday night, we were at Greg’s house for Easter. My daughter had prepared a video even though she didn’t know when I would get to 500 wins,” said LaFountain. “She had contacted dozens of my past players and they sent video messages and email messages.

“I’ve got all these quotes and pictures she put together, and it was really neat. To hear about the kids I coached 25 years ago, it makes you feel good hearing them talk about the memories they had.”