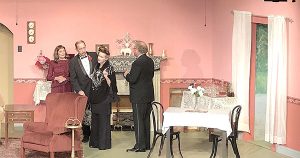 A scene from the delightful Noel Coward comedy “Blithe Spirit” featured at Playmakers Civic Theatre on May 10-12 and May 17-19.

The Playmakers Civic Theatre will present its production of the delightful Noel Coward comedy “Blithe Spirit,” that is directed by Matt Parker. The play will open on Friday and Saturday, May 10-11, with a pair of 8 p.m. performances and a 2 p.m. matinee for Mother’s Day on Sunday, May 12. It can also be enjoyed on May 17-19 at Playmakers Civic Theater, 604 West 6th St., Port Clinton.

Call 419-734-5044 for reservations, especially if you’re bringing mother for the Mother’s Day show.

The tangled tale revolves around a local clairvoyant, Madame Arcati, and a book author, Charles Condomine, eager to witness a seance. Not only does the play feature Candomine’s wife, but also his deceased first wife, the flirtatious Elvira.

You see, Condomine is writing a book featuring a homicidal spiritualist and wants to include a seance in his writing. To learn more about seances, Condomine invites his wife, Ruth, and their friends, Dr. and Mrs. Bradman, to share dinner at their home and the aforementioned seance.

While the medium is in a trance, Condomine hears the voice of his late wife, Elvira. But no one else can hear her. The flirtatious Elvira is manipulating Condomine do what she wishes, and causing trouble with his present wife, Ruth.

Condomine wants Madame Arcati to send Elvira back to where she came from, but it turns out Madame Arcati has no clue just how to do that. There’s never a dull moment at a Noel Coward comedy.