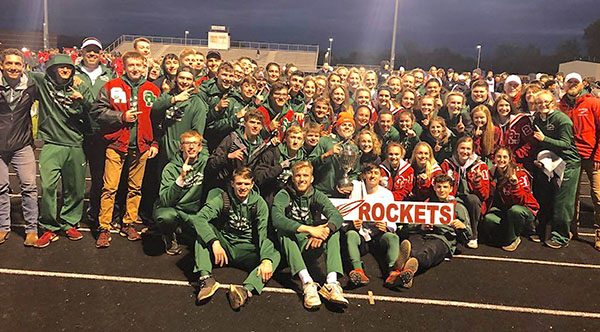 It was fitting that Oak Harbor’s 10th consecutive Sandusky Bay Conference would come in such dominant fashion.

For the last decade, the girls track team has dominated the competition in the Bay Division, and this was one of the Rockets’ most impressive performances. Oak Harbor won with 197 points, well ahead of Huron with 122 points. Edison was third (103), followed by Margaretta (81), Willard (65), Vermilion (49) and Port Clinton (41).

“We started a couple years ago thinking that 10 in a row might be possible with the kids we had coming up. We just graduated about a dozen girls two years ago, and if we could just get by last year, I thought that maybe we’d have a chance at 10 (in a row),” said Oak Harbor coach John McKitrick.

“Last year’s kids did a very good job of winning the title. We have a good set of juniors and seniors, but the bulk of our kids are freshman and sophomores. They know they’re walking into something that’s been building. No one wants to drop the ball.

“Our seniors don’t want to be the class that doesn’t win the SBC,” said McKitrick. “I think this is our seventh senior class that doesn’t know what it’s like to lose an SBC championship. This year, we scored 75 points or so in the field events. Each year, you do it a little bit differently.

“It’s nice to look back at all the kids who have been doing this. Winning 10 was nice, but having the boys on top was nice as well. This was only the second time in our program history that both the boys and girls teams won the league.”

Oak Harbor last won the SBC in 2015, and the program has come a long way in the last five years.

“Obviously, to win a (league) championship, there has to be depth on the team. One of the things we struggled with (in the past) was getting our numbers up,” said Oak Harbor coach Andy Augsburger.

“One of our freshman, Isiah Miller, we brought him into the hurdle events, and Brandon helped him out. Ajay and Aidan (Barton) have helped out some of the younger runners. If you have that environment, it’s going to get kids excited. When the older kids are trying to get the younger kids excited about the sport, that is important. That 2011 team was sort of a breakthrough, and last year was hurtful for us in not winning the conference, but it was something we learned a lot from. It was hard for the seniors of 2018 to not win an SBC championship. We knew what we had to do to get better.”

In the River Division, the Danbury girls finished seventh with 40.5 points. The best finishes came from Shana Marie Richard, who was second in the 100 hurdles in 17.62, followed by teammate Grace Clouse (18.08). Sydnee Perram finished second in the high jump with a leap of 4-10.00.