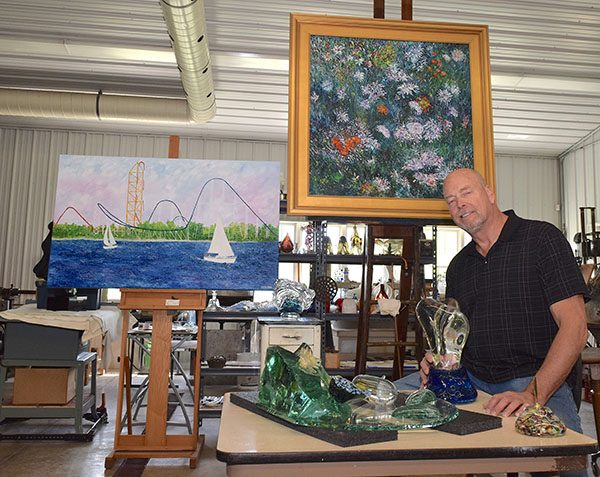 Ferguson Gallery owner Carey Ferguson is already working on creating his popular 2019 Christmas ornament this week, a popular object of art each year for his customers.

Artist and gallery owner Carey Ferguson will celebrate 40 years of creating wonderful artwork at Ferguson Gallery, 5890 E. Harbor Rd., Marblehead with a special show opening on Saturday, May 18 and running through Sunday, May 26.

The special show is entitled “A Life of inspiration through the eyes of my soul,” a special exhibit exploring a chronological history of Ferguson’s 40 years as an artist. His artwork ranges from cut glass to glass blowing and, more recently, oil paintings.

“I got started at just 17 years of age, going to work for my mentor, Walter “Babe” Langan in Cleveland,” said Ferguson, 62, whose original glass cutting shop was at East 55th Street and Euclid Avenue in Cleveland. “Babe was born in 1892, and was the only guy around who did glass beveling, as well as designs on glass such as birds and butterflies.

“We became the best of friends, and I learned so much from him during our 10 years together.” 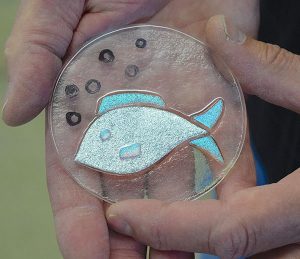 Carey Ferguson will be celebrating his 40th anniversary at Ferguson’s Gallery in Marblehead with displays of his artwork making their debuting on Saturday, May 18 and running through Sunday, May 26. (Photo by D’Arcy Egan)

Ferguson opened his own studio at 21 in Langan’s original shop, then moved his equipment to the Richfield area, just south of Cleveland he said. “My dad, Stanley, found an available building in the old Brooklyn area of Cleveland that was perfect for a new studio.”

It was the Carnegie Library building on Pearl Road, which had “great bones and lots and lots of shelves in the three-story building,” Ferguson said.

“Twenty-two years later, trying to chill out and slow down my life, I moved the business to Marblehead,” said Ferguson. “I did glass cutting, beveling and polishing, which is called cold glass work.”

When his son, Carey, Jr., wanted to try glass blowing, dad and son took a course at the Toledo Museum of Art. Both fell in love with the process, so they expended the Ferguson Gallery to add glass-blowing equipment and learned how to help customers enjoy the experience, too.

“And we’re still at it,” said Ferguson, who will begin glass blowing sessions on Saturday, May 25. His son’s career has taken another turn after graduating with a master’s degree in business last week from Baldwin Wallace University in Berea.

“Carey was a bit of a goofball, like me, in high school,” he said. “But he’s turned it around and now studies business from an analytical point of view.”

Ferguson’s latest efforts have focused on painting in oils, selling originals and prints.

“If there’s one constant in my oil paintings, it’s water,” he said, from his years on the Lake Erie shore. “From jellyfish to Lake Erie waves and boats, it’s something I love.”