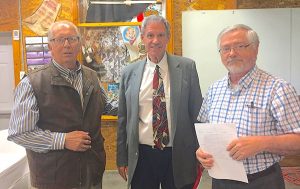 Featured historians Navarre descendant Terry Breymaier and Larry Michaels were introduced by President Patrick O’Keeffe, far right, at the spring meeting of the Ottawa County Historical Society at The Barn, a historical venue in Elmore.

Local historians Larry Michaels and Navarre descendant Terry Breymaier twirled stories of the War of 1812 and the turning points of that war to a capacity crowd of Ottawa County Historical Society members at their recent spring luncheon meeting at The Barn in Elmore.

The members enjoyed the often humorous telling of “The Life and Times of Peter Navarre” by Michaels, who spun lively stories of the War of 1812 courier and scout who delivered the famous message from Oliver Hazard Perry to General William Henry Harrison: “We have met the enemy and they are ours.”

Michaels gave a unique and personal telling of the seminal battles and turning points of the war that Peter Navarre had witnessed, from the siege of Fort Meigs, the defense of Fort Stephenson and the massacre at the River Raisin to the Battle of the Thames and the Battle of Lake Erie.

Michaels reminded society members that Ohio, Michigan and Wisconsin would not have existed without American victories in these battles, which proved to be the turning point of the final territorial confrontation between the British and the Americans.

Breymaier has served as the president of the East Toledo Historical Society and is the author and co-author of many local history books, including “Peter Navarre, War of 1812 Scout.” Breymaier has taken part in many costumed reenactments. He and his extended family have been instrumental in preserving  the family’s  history.