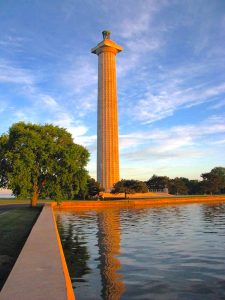 The iconic Perry’s Victory and International Peace Memorial at Put-in-Bay on South Bass Island is open for the summer, celebrating its 104th year in operation.

NPS events to be sure to put on the summer calendar include:

Stories of Victory, June 12, 3-4 p.m.
Park Rangers historically dressed will give a tour of the grounds and Memorial Column.

104th Anniversary of the Memorial Opening, June 13
Ranger programs on column construction, restorations and maintenance will be held during the day to celebrate.

World Ranger Day, July 31
A global observance of Rangers across the world who died in the line of duty over the past 12 months.

August Sky Tour, Aug. 14, 9-10:30 p.m.
View the night sky from the Observation Deck at Perry’s Victory and International Peace Memorial and learn how mariners navigated by constellations and stars.

Patriot’s Day, Sept. 11, 10 a.m.-6 p.m.
The American flag and flags of the countries who lost citizens during the tragedies on Sept. 11, 2001 installed around the Memorial column in tribute.