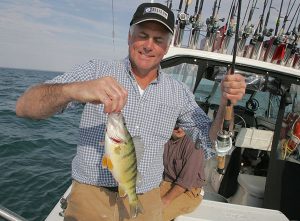 Lake Erie fishermen are hoping this year’s yellow perch season will produce a lot of “jumbo” perch, such as this one reeled in by Joel Christian. (Photo by D’Arcy Egan)

With a great week of weather, the Lake Erie walleye fishing was very consistent. Even when anglers experienced some winds, it seemed that whereever we went, the walleye bite was at an amazing pace.

Charter boat anglers and private boaters alike all got their limits, ample proof once again that Lake Erie is the Walleye Capital of the World.

Anglers choosing to cast had very good luck this week. Bottom bouncers with two- to five-ounce weights weighing down their rigs proved to be the perfect combination. Another very productive way to catch walleye was by using a casting harness and a “weapon,” or small spinner rig with a one-ounce egg sinker attached.

The hot spots have been quite consistent lately, as well. The West Harbor fishing guides and sport anglers have been heading straight north coming out of West Harbor, working fertile waters on the Canadian line to corral plenty of walleye lately. Another spot anglers found to be walleye friendly was a line between Lucy’s Point on the northeast corner of Middle Bass Island and Gull shoal, between Kelleys Island and Canada’s Middle Island. The waters west of the islands continues to be a little dirty, but it should be clearing soon. When it does, expect that area to produce a few more prime fishing spots.

Trollers have been fine tuning their methods this week. Some are choosing to use crankbaits while others have been using the “red hot” Tru-Trip diving planers with spoons. The Tru-Trips have been working for the last few days but, as with everything else, mixing it up a little has worked well.

Silver Streak spoons have also been very productive. As for as far back you need to set these, you will want to check your water depth. Read the chart on the Tru-Trip to know where to set it. I was out and had mine set at 30 feet back. Everything depends on the water depths.

Keep your speeds between 1.9 and 2.0 knots and mix up the colors you are using. If it appears to be a tough bite, switch over to worm burners, which is a spoon and a harness baited with a nightcrawler. The best location to troll has been to the north between the Bass Islands and Kelleys Island. The waters west of Catawba have also produced limit catches.

I was personally west of Catawba a couple of days this week, and relied on trolling spoons to produce a very consistent bite for my group of anglers.

We have still been seeing plenty of catfish coming in to Bay’s Edge Fishing Cleaning that were caught from Sandusky Bay. Whether you are out on a boat or just bank fishing, the probability of hooking a catfish is pretty good. Regular nightcrawlers or any type of catfish bait have both worked well.

A few people have reported they are catching catfish right off the old Bay Bridge access road off of Bayshore Road.

With the weather finally looking like it may straighten out, the walleye bite is only going to get better and better. The nicer weather is also going to bring more boaters, so be mindful you are sharing the lake with other anglers.

Have fun out there and enjoy the weather and fishing while you can. As always, keep a tight line!