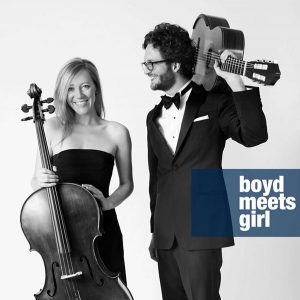 The duo’s repertoire ranges from the baroque to modern, including many of their own arrangements. Both are acclaimed musicians, with Boyd described by Classical Guitar Magazine as “a player who deserves to be heard,” and Metcalf called “brilliant” by Gramophone. They released their first CD in 2017, followed by a world tour.

Following the performance, the audience will be invited to meet the performers at a reception. This concert is sponsored by Dubbert’s

Outdrive with accommodations provided by Our Guest Inn. Tickets ($15) are available at the door. Students are admitted without charge.