Veterans gather in Port Clinton for a Memorial Day salute 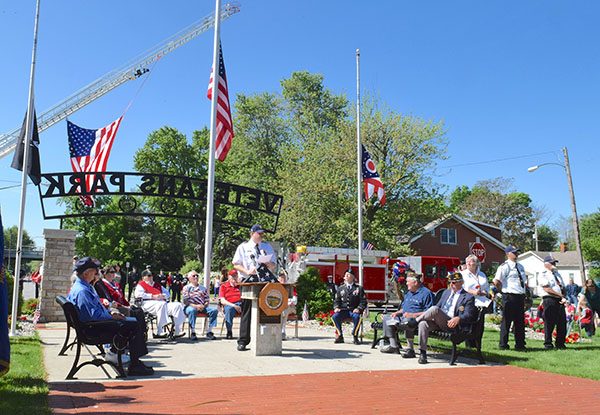 Kevin Winters was the keynote speaker at the annual Memorial Day Ceremony at Veterans Park in Port Clinton, paying homage to all of the veterans who had lost their lives in service to the United States. Sgt. Bert Fall was the Master of Ceremonies, and the Port Clinton High School Band provided a stirring rendition of the Armed Forces Medley, a collection of the official marching songs of the United States Armed Forces: Army, Marine Corps, Navy, Air Force, and Coast Guard. (Photo by D’Arcy Egan)

A holiday crowd in Port Clinton gave a rousing salute to its many veterans on Memorial Day, with Veterans of Foreign Wars Post 2480, American legion Post 113 and Amvets Post 10 appreciating the accolades of a job well done.

Kevin Winters was the keynote speaker on Monday morning, even though he had never served in the armed forces.

When Winters asked the members of VFW Post 2480 a few years ago if he could carry the American flag in a 5K race, its members were impressed with his passion for the military and its long and storied history.