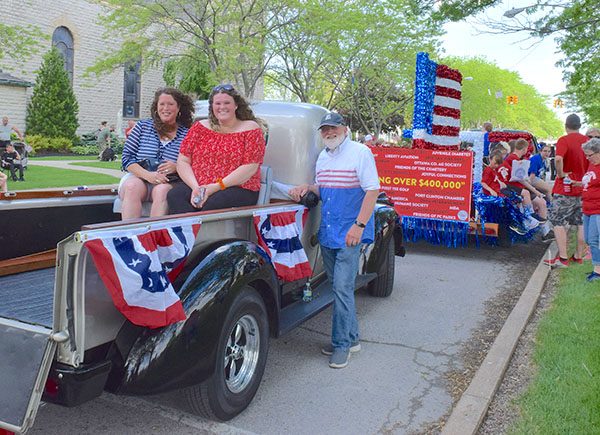 With bittersweet memories, Port Clinton Councilwoman Beth Gillman and Daughter Evelyn Gillman accept the duties of Grand Marshall of the David W. Leonard Fraternal order of Eagles Grand Parade win Saturday in Port Clinton. They were filling in for the much-beloved Chris Galvin, the head of United Way of Ottawa County who passed away shortly after her recent retirement. (Photo by D’Arcy Egan)

This year’s David W. Leonard Fraternal order of Eagles Grande Parade, a highlight of this week’s 39th annual Walleye Festival, was a bittersweet march through the streets of Port Clinton on Saturday.

Much-beloved Chris Galvin of Port Clinton was to be the Grand Marshall, a ceremonial post earned for her many years of volunteer work for a long list of agencies around the area, as well as being the tireless executive director of United Way of Ottawa County for more than three decades.

Galvin enjoyed a vacation after her recent retirement from United Way. Upon her return, she passed away suddenly, shocking her legion of friends around the community.

Filling in for Chris Galvin as Grand Marshall was her daughter, Port Clinton Councilwoman Beth Gillman, and granddaughter Evelyn Gillman. To give the sendoff a big buzz, the students at Immaculate Conception School dressed as bumblebees to follow the 1946 General Motors pickup truck owned by Port Clinton native Douglas Braun that carried the Grand Marshall.

The beautiful old truck would have been a delight for Chris Galvin. Both were born in 1946.

Chris Galvin was an inveterate beekeeper, and the youngsters celebrated her devotion to her bee hives, her legion of volunteers throughout the community, and the many groups and organizations she had supported for so many years.

“I wish I could capture the humbleness I felt today as Kami Sayre gave me beautiful earrings crafted by Joe Helle to celebrate being Grand Marshall,” said Port Clinton Councilwoman Beth Gillman. “I wish I could relive, over and over, the familiar faces and the faces of those just filled with joy, young and old. My Mom would have loved everything about today. She would have been so happy to see my own 17-year-old, Evelyn, in a LIVE UNITED shirt.

“She would have gleamed with joy seeing all of the ‘bees’ the Immaculate Conception kids brought to life. She love the people and places that made it home, and welcoming others into her home.” 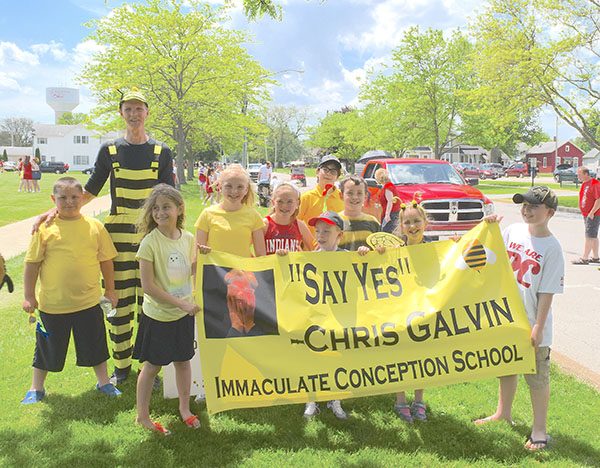 A little swarm of “bumblebees” from Immaculate Conception School honored the late Chris Galvin at the Eagles Grande Parade on Saturday in downtown Port Clinton, Galvin, who passed away after her recent retirement from United Way of Ottawa County, was a very active parishioner at Immaculate Conception Church and an avid beekeeper, and ICS Custodian Tim Whitt had them all buzzing. (Photo by D’Arcy Egan)