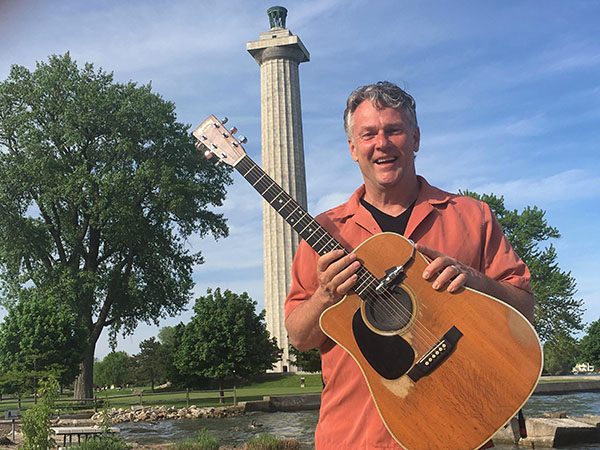 Bob Gatewood’s popular tune, “Friends of the Bay,” was voted the official song of Put-in-Bay by the Put-in-Bay village council in 2014. For three decades, Gatewood extensively toured the country to perform. These days, he’d rather spend his summers enjoying the island life, and entertaining all of his friends who come to visit. (Photo by Jeff Koehler)

Bob Gatewood loves to sing for his friends, and these days they won’t have to go far to find him throughout the summer. Put-in-Bay has been his home for the past 15 years, and entertaining the summer visitors has always been his passion.

“I loved growing up in Lakewood, on the West Side of Cleveland, but the bucolic scenery and island life lured me permanently to Put-in-Bay,” said Gatewood the other day, over a few cold beers. “It has such a small town, neighborly feel to it.

“Put-in-Bay, though, is one great, big music festival all summer. You can wander from bar to bar and enjoy some great bands, a reason why we have so many talented regulars, from the legendary Pat Dailey to Mike ‘Mad Dog’ Adams and Ray Fogg. Every bar here has its own personality, from the big gigs at the Beer Barrel to the intimate feel of the Reel Bar and the Boat House. And, of course, that terrific old-timer, the Round House Bar.”

The island performers are all characters in their own right, said Gatewood. While many aim for that tongue-in-cheek party atmosphere that often prevails, Gatewood has leaned toward more introspective looks at island life, his songs a bit more serious.

“It was a big thrill when The Plain Dealer’s Minister of Culture, Michael Heaton, wrote in an interview that my song, ‘I Ain’t Working for the Man,’ has become a working-class anthem. He really nailed it. But I have to say my all-time favorite is ‘Friends of the Bay.’”

Gatewood will headline the biggest gig on South Bass Island on June 8, bringing in his band Calabash for the Put-in-Bay Musical Festival at Perry’s Victory and International Peace Memorial.

It’s a free concert, bring a lawn chair or a blanket, but coolers are not allowed. Adult beverages are available, as well as tasty island food. Be prepared to kick back for a while, or dance on the grass. The music will play from noon to early evening, and the lineup is sensational. 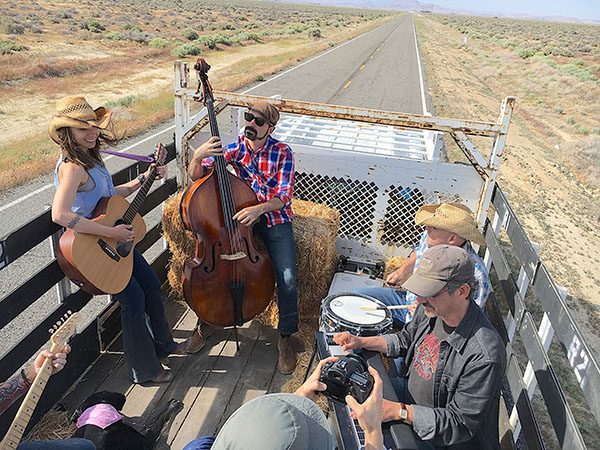 Bringing their popular country music to this year’s Put-in-Bay Music Festival on June 8 will be the Georgia band Few Miles South, an upbeat, steel metal to the pedal group getting rave reviews all around the country.

On stage, in order, are School of Rock from Farmington, Mich., showcasing young talent; Cold Shot, a Detroit Stevie Ray Vaughn tribute band; Fuel on Fire with original tunes and well-known favorites; Few Miles South, an upbeat Georgia country band getting rave reviews around the country; Nebraska-born Kris Langer Band, which has deep roots in blues and classic rock; and Gatewood, joined by one of the island’s favorite bands, Calabash.

Gatewood, 58, used to play more than 300 shows each year, from Key West to Put-in-Bay and lots of Cleveland area hot spots. But being an islander full-time also means being an entrepreneur with his lovely wife, Andrea Lee.

“It’s certainly a way to get up early and go to bed late,” said Gatewood, chuckling. “Andrea Lee and I have AB Cart Rentals for go-karts and Kelleys Island Kayak Rental, with another kayak rental place on Put-in-Bay. AB Lodging will open later this year. My master plan is to step back a little bit from the rock and roll to bolster these small businesses.

“But on Saturday afternoon, out pops this beer-chugging son of a gun who’s born to be a singer doing his Musical Music Hour, throwing out the sombrero and playing Tex-Mex stuff. For a real kick, you’ve got to catch my no-handed Mexican Hat Dance,” he said with a laugh.