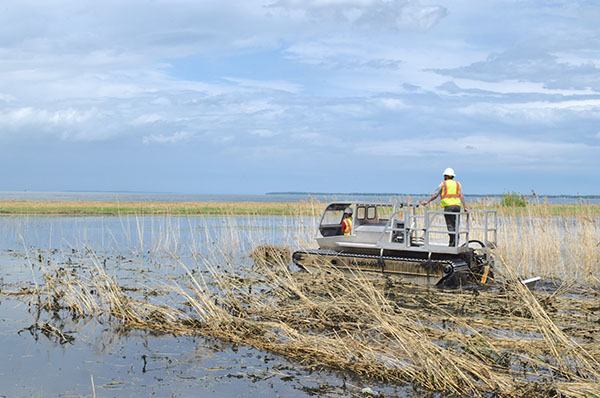 Where did all of the phragmites go? Workers from Tidewater Inc. of Elkridge, Md., employed a unique, tank-like MarshMaster to begin eliminating the noxious, invasive weeds. The MarshMaster provides a simple, low cost method that rolls and flattens grasses. It is ideal for invasive phragmites and cattail control to create open water waterfowl habitat. (Photo by D’Arcy Egan)

The Port Clinton Lakeshore Preserve has a lot of moving parts and the wetlands restoration project will take time, but the five-year project in the muck and mire of the marsh on the Lake Erie shoreline in downtown Port Clinton finally began this week.

Noxious phragmites, an invasive parasitic plant that had taken over the 12.2-acre site in recent years, is being removed. Native wetlands will replace it, a bonus for shoreline residents who enjoy a view of Lake Erie’s blue waters and sandy beaches hidden by the tall phragmites that spread a bit more each and every year.

“We’ve taken the first step, and it is pretty dramatic,” said Safety-Service Director Olen Martin of Port Clinton. Workers from contractor Tidewater Inc. of Elkridge, Md., employed a MarshMaster tank-like machine to flatten and remove the phragmites, which brought rave reviews from shoreline residents on East Perry Street. They can now see Lake Erie’s waves from their front porches, and native marshland will lure migratory birds in the future.

The signs are up on East Perry Street, calling attention to a five-year project to create more than 12 acres of native wetlands on the Lake Erie shoreline in downtown Port Clinton.

The project is being done with a $1.3 million grant from the U.S. Army Corps of Engineers and $268,000 from the Ohio Environmental Protection Agency as part of its Water Resource Restoration Program. The Port Clinton Lakeshore Preserve properties were purchased in 2009 for $1.4 million with the help of grants.

Now that the first assault on phragmites by the MarshMaster machine has leveled the tall plants, more cuts will be done. They will soon excavate the deep roots of the phragmites before the wetlands can be rebuilt, said Martin, and treat the area with a herbicide to thwart their return.

“In essence, we’re recreating a natural Lake Erie marsh,” Martin said. “It will become an excellent area for migrating waterfowl and songbirds to visit during their migration.”

The wetlands of Northwest Ohio already bring tens of thousands of birdwatchers to Port Clinton and the region for The Biggest Week in American Birding each year in early May.

A downtown Port Clinton birding experience will certainly be more than a possibility. Wood duck boxes are already perched in the phragmites-filled area, and Canada geese and redwing blackbirds, snowy egrets and killdeer are common, as well as muskrats.

The Port Clinton Lakeshore Preserve will also be ecologically responsible. More than 90% of the valuable wetlands of northwest Ohio’s Black Swap were converted to farmland, highways and byways and housing developments centuries ago, nullifying its ability to filter pollutants that would flow into Lake Erie.

“The Port Clinton Lakeshore Preserve is not going to happen overnight,” emphasized Martin. “This is a five-year project, and a very involved process that requires a lot of expertise by the Corps of Engineers and the Ohio EPA. Phragmites is a very stubborn invasive species to remove. It won’t go away very easily.”

BY D’ARCY PATRICK EGAN Santa and Mrs. Claus are a popular pair at this time of year, and over the last few days it’s been difficult not to bump into...