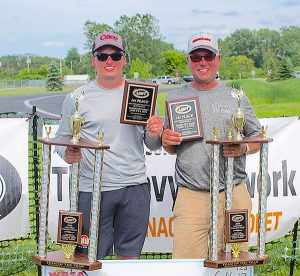 Gary (left) and Alex Kisel of Macedonia show off their trophies after winning the Lake Erie Walleye Trail Championship in Huron, Ohio and capturing the LEWT Team of the Year.

The father-and-son team of Gary and Alex Kisel of Macedonia, Ohio wrapped up a topsy-turvy weekend of Lake Erie Walleye Trail tournament action by weighed a two-day limit of 10 walleye that pushed the scales to 73.11 pounds, winning the Crown Battery/Sharpnack Direct Championship hosted by Erie Outfitters in Huron, Ohio.

The Kisels topped a field of 60 two-angler teams on Saturday and Sunday, June 7-8, to win $5,200. They parlayed a 9.67-pound walleye on the second day to seal the victory.

Bad weather had cancelled the Friday opener of the tournament, but tournament limits of five walleye were plentiful on Saturday and Sunday.

The Kisels notched their second straight LEWT win of the season to take the Vic’s Sports Center LEWT Team of the Year title, winning $1,890 in cash and prizes. Francis Ball of Alliance, Ohio and Paul Kerr of Lowellville, Ohio won the trail’s Knockout Challenge, collecting $3,000.

The Big Fish Award on Saturday went to the team of Steve Tyszko of Millersport, Ohio and Chris French of New Albany for a 10.05-pound walleye. Second-day Big Fish honors went to the overall third place finishers, Mike Miller and Tim Bock, for weighing a 10.22-pound walleye. The big walleye each earned a $600 jackpot.