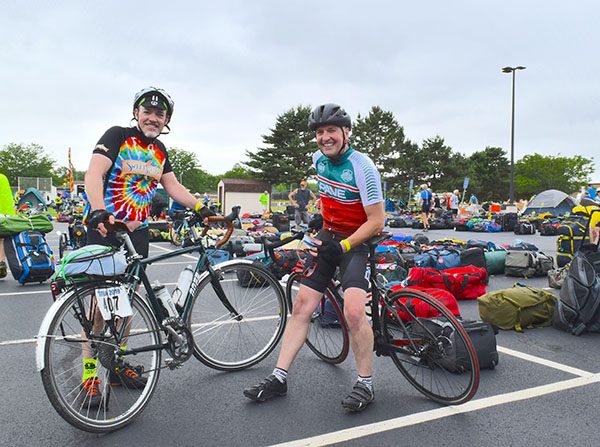 Bicycling friends Kevin Goff, left, of Bay Village, Ohio and Brian Boucher of Vermilion, Ohio, had set up a tent at Port Clinton High School and were ready to ride in the Great Ohio Bicycling Adventure in eastern Ottawa County on Monday through Thursday. (Photo by D’Arcy Egan)

Many bicyclists enjoy the solitary freedom of the open road. The Great Ohio Bicycling Adventure this week, however, was a very social gathering in Port Clinton and Ottawa County.

After setting up tents on Monday and planning trips Tuesday morning, four-wheeled traffic had to be aware some new folks were in town, as hundreds pedaled the highways and byways on their way to Lakeside Chautauqua from the base camp at Port Clinton High School.

“This is our fourth trip to Port Clinton and everything has been going very smoothly,” said Brian Peters of Columbus Outdoor Pursuits, which organizes the annual Great Ohio Bicycling Adventure. “We’re delighted with the number of volunteers who are helping everyone get settled at Port Clinton High School, and the great hosts we have for the 31st year of the GOBA.”

The bicyclists will head to Oregon, Ohio on Thursday morning, and wrap up this year’s GOBA in Bowling Green on Friday. 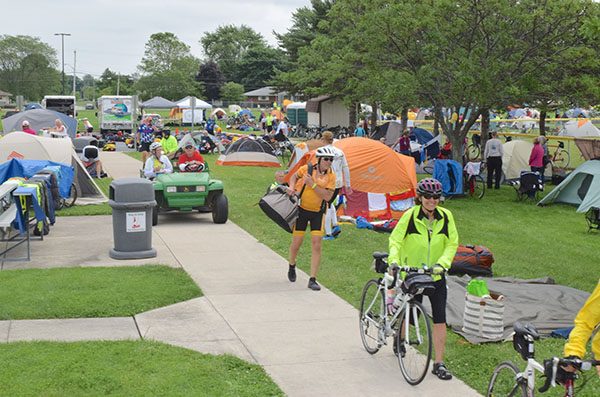 It didn’t take long for the Great Ohio Bicycling Adventure riders to set up tents on the Port Clinton High School grounds and kick off three days of bike rides on the Lake Erie shoreline. (Photo by D’Arcy Egan)

Peters works to make the Ohio Trail Shuttle a success, a 326-mile trek from Cincinnati to Cleveland on the Ohio to Erie Trail, mostly an off-road adventure.

The GOBA adventure requires a lot of planning, from ferrying each bike rider’s gear in large trucks to the various campsites and to providing busses for trips to places such as Cedar Point Amusement Park or the Miller Ferry on Catawba.

“There’s so much to see and do, and so many side trips to ride,” said Peters. “I told Jeff Pierron, the first year director of this year’s GOBA ride, that if you are in Port Clinton and don’t have a fish fry, you ought to be fired.”

The most common question from riders, said Peters, was the location of GOBA in 2020.

“We don’t announce the location of the next year’s adventure until Thanksgiving, but everyone tries to get the early word in order to make plans,” Said Peters.