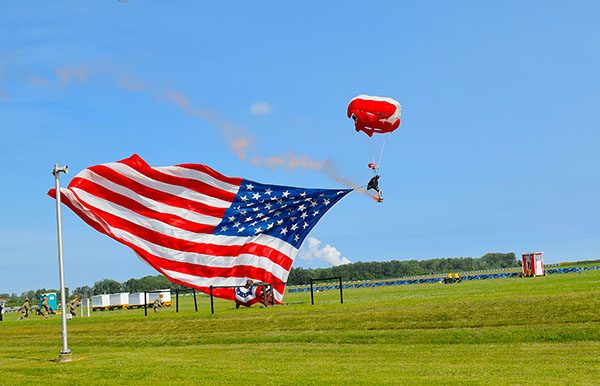 For the second year double amputee Dana Bowman, formerly a U.S. Army Golden Knights skydiver, dazzled the crowd at Camp Perry by dropping in from 3,000 feet with a huge American flag. 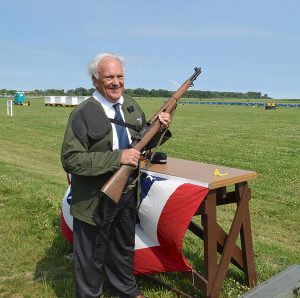 The patriotic ceremony applauded all of the branches of the military, lauded the iconic National Matches and praised the Ohio National Guard’s Camp Perry, which has continuously hosted the National Matches since 1907.

“When you mention Camp Perry, it’s pretty much like mentioning Augusta, or Oklahoma City,” said Stone, the CMP vice chairman. “You don’t have to say what’s going on at those places. Mention Camp Perry, and everyone knows you’re talking about the shooting sports and the National Matches, just like everyone knows you’re talking about premier golf and college baseball events when you mention Augusta and Oklahoma City.”

Surprisingly, it was announced on Monday at the National Rifle Association, once the major host of the National Matches, will not be sponsoring any of the shooting competitions in 2020. The NRA has limited its participation in recent years, and this year will sponsor only the pistol competition this week. 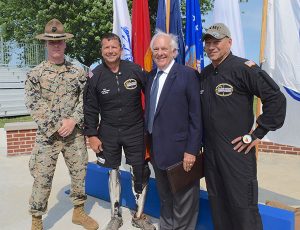 The stars of the show at the First Shot Ceremony at the Civilian Marksmanship Program’s National Rifle and Pistol Matches at Camp Perry on Monday were skydiver Dana Bowman and long-time CMP official E.C. “Chris” Stone, who fired the first shot on the Rodriguez Range. From left to right are U.S. Marine Sgt. Cameron Patrick, Bowman, Stone and skydiver Doug Doss. (Photos by D’Arcy Egan)

In 2020, the NRA pistol championships will move to Atterbury, Ind. The CMP has said it will continue its efforts to grow the National Matches at Camp Perry, and continue to modernize the ranges in its partnership with the Ohio National Guard. The indoor air rifle range and the outdoor pistol and rifle ranges at Camp Perry all feature state of the art electronic scoring.

The NRA pistol championships will run through Friday, July 12. The CMP small bore rifle and CMP high-powered rifle competitions will keep the ranges busy through Aug. 9. The National Matches are open to the public with no admission charge, including the popular commercial row.

For more information on the CMP and the national Matches, visit TheCMP.org.