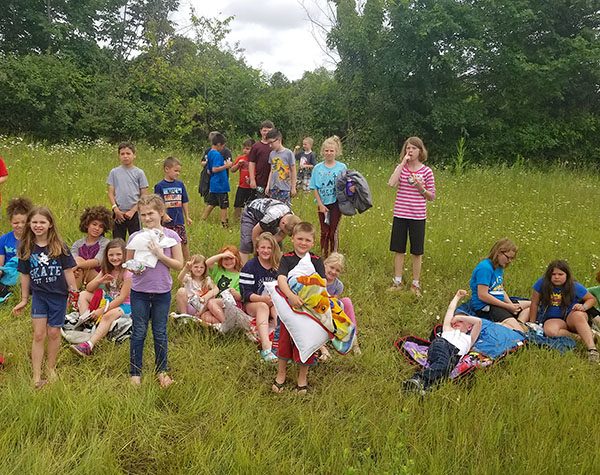 A crowd of 46 kids on the way home from Camp NEOSA last week ended up on the side of a highway after their bus had mechanical trouble.

Editor’s Note: Thanks to personnel from the Summit County Sheriff’s Department and a great staff and customers at a McDonald’s Restaurant in Massillon, Ohio, Director Maureen Saponari and chaperone Adanda Whitt managed to shepherd a crowd of 46 kids home from Camp NEOSA despite a disastrous bus breakdown. Director Saponari was invited to tell her tale to readers of The Beacon.

The Salvation Army’s Camp NEOSA pick up day at the end of a week-long camp in Carrollton, Ohio in rural Carroll County, has always been an adventure for our The Salvation Army crew from Port Clinton. Last week the voyage home began just like it had the past 10 years.

It was the calm before the storm.

As Director of The Salvation Army, I started our journey at 6 a.m., leaving Port Clinton in a Salvation Army van loaded with about 100 sandwiches and other lunch snacks. When we arrived Camp NEOSA in Carrollton, the buses met us and we loaded our two buses with kids and supervisors. My bus was filled with 46 happy children from Ottawa County between the ages of 6 and 12.

The first 40 minutes, or so, after leaving the rural camp were filled with hills and hairpin turns but, before we knew it, we were on the highway home.  Within the first 30 minutes of driving the bus started to get warm. Worried about the heat, driver Dana tried to figure out the problem, and finally decided to pull over to the berm on Interstate 77.

Besides the normal complaining of it being too hot, and my telling them to take their sweatshirts off to cool off, some of my kids were feeling sick and a few vomited.

While the driver worked on figuring out the problem, chaperone Amanda Whitt and I got the children off the bus and march single file to a grassy knoll. I stationed in ankle deep mud to help them over the creek and up a hill in the long grass. (It is a good thing I try my best to stay in shape and strong!)

Thankfully, Deputy Timothy Kensinger of the Summit County Sheriff’s Department stopped to help us. He talked with the bus driver and after 30 minutes or so, we decided to load the kids back on the bus and take them to the next exit, where there was a McDonald’s Restaurant.

We were again on our way, but within five minutes one of my campers was experiencing a full-blown asthma attack. While Deputy Kensinger escorted us to the next exit, I tried to calm the camper’s breathing. It was hard to do in the stifling heat on the bus, along with the fumes.

When we got to the parking lot, I immediately took the camper off the bus and put her into Deputy Kensinger’s cruiser for much-needed air conditioning. We quickly decided to call for an emergency squad. They promptly arrived, and the EMTs immediately began breathing treatments.

After assessing her condition, it was determined there camper should be transported to Akron’s Children Hospital. We unloaded the rest of the bus and Amanda, Deputy Kensinger and the captain of the Fire Department/EMS walked the kids to McDonald’s.

I stayed with my asthmatic camper in the ambulance until it left for the hospital. Deputy Kensinger and the captain were simply amazing with the kids, laughing and playing games with them while walking them to the McDonald’s at 3672 Massilon Rd., Massillon, where cold drinks and air conditioning was waiting. When the men came back, the comment was ”WOW! That was like herding 46 wet cats!” 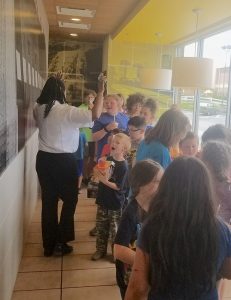 A gracious staff and a wealth of friendly customers at a McDonald’s Restaurant in Massillon helped a gaggle of Camp NEOSA kids from Ottawa County ride out a lengthy bus breakdown last week.

The McDonald’s staff had given the kids free drinks and were working on free french fries when I got there! Throughout the next 3 to 4 hours I simply cannot say enough about the managers and staff! They provided not only free drinks, fries and cookies, but also coloring materials, as well as lots of support.

Let’s just say when you have 46 kids in a small area like that – things will happen! There were a lot of questions and fears. When would the bus be fixed? Did you , call my parents? We had more than a few stressful moments, but all in all, these kids were just amazing with the incident.

Some of the kids started making paper airplanes. Never mind that they were shooting them up and over the chandeliers, then trying to stand on the tables to get them down!

They were making origami for the regular patrons at McDonald’s, cleaning the tables and floors and having conversations with everyone. One customer was a professor from Akron University, and had an audience of a half-dozen of my kids, talking to them about his process of writing a book and just about life.  It was an amazing experience for me to sit back, as I was trying to correspond with my parents and the Toledo office while charging my phone on the professor’s charger, and listening to the conversation between young and inexperienced and older, wiser and experienced.

Soon the bus driver called and told us she was on her way back. The bus was fixed!  We ordered Happy Meals for all of the kids, paid our bill and then lined up, got on the bus and started our journey back to Port Clinton.

They kids were a still bit wound up on the bus, but obviously excited to finally get home. My words to them on the bus were to try to take situations that you have no control over in life and make the best of it.

They probably did not want to hear another word out of me, at that point!

`At one time during this day, I was sweating from the heat and fumes like everyone else. One of my campers pointed out, “Miss Moe, you are sweating!” To which I replied,”Yes, I am. And I smell, too!”

I would like our community to know that whatever happens, I will always take care of their kids, because I consider them my kids, too. I will always remember and treasure the enormous generosity, caring and compassion of Deputy Kensinger, the EMT/Fire Department and McDonald’s staff and all of their patrons.

That I had this amazing experience with “my Camp NEOSA kids” is something I hope they will never forget!