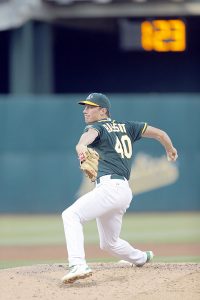 A 2007 graduate of Genoa High School, Chris Bassitt has overcome Tommy John surgery to make it to the big leagues with the Oakland Athletics.

Chris Bassitt has come a long way since his days pitching for the Genoa Comets.

The Curtice native and University of Akron alum has recovered from Tommy John surgery and is now in the midst of a strong season with the Oakland Athletics. He is currently part of a stellar rotation and sporting a 6-4 record to go with a 3.98 ERA.

“It’s been pretty good. I’m truly healthy since my surgery. I would definitely say it’s the best I’ve felt post-surgery. I think I’m near 100 percent when it comes to feeling normal,” Bassitt said. “This is my first very long stint in the big leagues where teams can truly game plan for me. It’s been a lot of fun.”

“I think everyone coming into this year constantly talked about our bullpen. I got asked many questions in the spring like ‘Are the starters going to be good enough?’ I told people, ‘We’re way better than people think. It’s come to fruition,” said Bassitt.

“There are two months left, and our starting pitching has been really solid for us. Our bullpen guys have stepped up that we weren’t really expecting. It’s a team effort — our lineup, our hitting is definitely up there with the best in the league. There’s no doubt that our lineup is one of the best in all of baseball.

“We’re playing really, really well. I think it’s pretty surprising that we’re in the position we are right now. I say that in a good way. What our team has gone through, who’s been injured for us — Matt Olson, we lost K.D. (Khris Davis) for a month and (Matt) Chapman was banged up in the offseason. Our cornerstone guys haven’t been healthy for us. Our bullpen has struggled a little bit. It’s been a team effort more than any time I’ve been here. It says a lot about the team and who we have here.”

Heading into last weekend, the A’s were 53-41, good enough to be tied with Cleveland for the final wildcard spot. Oakland is also in the hunt for a division title and trails Houston by 5½ games.

Bassitt, who is expecting a daughter with his wife Jessica, began his career with the Chicago White Sox before being traded to Oakland as part of a deal that included Jeff Samardzija.

Bassitt takes pride in his relationship with A’s executive vice president of baseball operations and former general manager Billy Beane, who was the subject of Michael Lewis’ captivating book on baseball economics, Moneyball, which was made into a film starring Brad Pitt as Beane.

“Billy Beane, he and I share a relationship because of our love of the outdoors. I think our relationship is pretty good. He’s a straight shooter, similar to my high school coaches — if you messed up, he’s going to let you know. He’ll definitely tell you when you’re doing something wrong. He’s obviously extremely smart. I feel like he’s two steps ahead with what he’s doing. He’s pretty advanced, he’s a great person and he’s good at his job.”

Through his journey in the Major Leagues, Bassitt has stayed true to his old-school roots. He appreciates the tough love he received from his parents, John and Dawn, as well as from his coaches when he was growing up.

“I think my parents didn’t really support me as a baseball player, but as an athlete as a whole. Obviously, baseball is part of being an athlete. For me, I had a mother who was extremely supportive. My father was the tough love — I think that the biggest thing my dad did for me was give me tough love; that’s a lost art for parenting. My father didn’t reward me for being mediocre,” said Bassitt.

“This might be a little political, but I think parenting has become a little too soft. My parents were definitely very supportive, but they very much pushed me to strive to be better. That mindset growing up paved the way for me to handle things nowadays. My parents have successfully trained me to deal with the adversity and face it.

“I was awkwardly blessed to have the coaches in Genoa. The coaches I have, they would be considered mean or too hard (today). To this day, when I come home, I’m going to see them. My love for them, that hasn’t changed. When I played for them, it was a grind. If you messed up, you got chewed out. It was a different day and age when adults were allowed to ‘adult’ kids. We not only embraced it, we kind of thrived because of it. The thing is, I couldn’t go and run home to mom and dad. (My parents) knew the coaches I had and respected them.”

Bassitt, who graduated from Genoa in 2007, was part of a very successful class on the playing fields.

“We had 10 to 12 college athletes in my class — guys like Adam Shumacher, Ryan Gargas, Sam Pinkerton, Cory Hornyak, Nick Perdue and Kurt Wolff. Our parents were similar. They were always tough on us.

“The coaches wanted the best for us. People don’t understand that nowadays, people having that tough love. I don’t think people realize how important that is — they’re going to be offended or scared. I could handle it when I was young. Now, I’m thriving at 30 because ever since then, I’ve been trained for this moment.”

Bassitt’s brother, Matt, was also a standout athlete. He was the quarterback of the football team and played basketball and baseball.

“Matt was definitely the better athlete of the two. I was kind of the embarrassment in football and he came in and shattered every (passing) record. I think he was truly a better baseball player. I can just throw the ball better. He was better at basketball,” said Chris. “He was always around the group and me growing up. He was three years younger than us. He soaked it all in.”

Bassitt takes seriously being a role model to children in Genoa, Curtice, Williston, Clay Center and the surrounding area.

“I kind of talked about that when I went to Akron and first got drafted. I used the platform I have to hopefully pave the way. The way that the world is today, you can be found,” he said. “I hope people can look at me and see that it’s a realistic dream. You definitely have a legitimate chance to do what we do. You can find some serious talent — look at (NFL lineman) Michael Dieter. It’s not just another small town in Ohio. There’s not a reason why you should not shoot for the very top.”