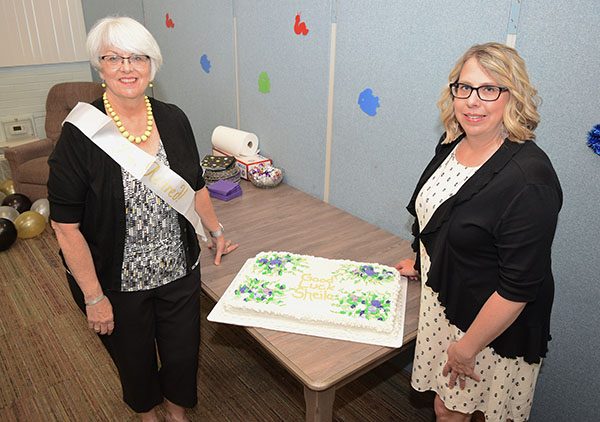 Sheila Powell, left, was recently honored by the community after she announced her retirement as Director of Joyful Connections, a unique social service agency providing safe, secure and nurturing opportunities for children and parents that have become disconnected. Taking over the reins of the Oak Harbor agency is program manager Shanna Strouse.

Joyful Connections was created by the Ottawa County Class of 2007 to successfully test the premise that children can develop in a healthier manner when they can interact with parents who have been in conflict. For the last five years, Sheila Powell has done a wonderful job of directing that mission, but recently announced was is time for her to retire from the Oak Harbor agency.

“I have throughly enjoyed being director of Joyful Connections, and enjoyed the support of the many volunteers, visitation monitors and program manager Shannon Strouse,” said Powell. “My husband and I have six children, and keeping up with our 25 grandchildren and six great-grandchildren has been impossible. The kids are spread all over the country, and it’s time for us to travel to visit them.”

Powell volunteered to be on the first Board of Directors of Joyful Connections when it was created in 2007. She became a visitation monitor in 2009, fiscal director a year later and Executive Director in 2013.

Mental health professionals affirm that children placed outside of the home need immediate and frequent contact with their parents to minimize the trauma that can impact their physical and emotional health.

“The most difficult situation we deal with is mothers and fathers who have had their parental rights severed because they didn’t correct what needed to be,” said Powell. “When they come for a final visit, knowing it is the end of their relationship with a child, it can be devastating.”

On the other side of the coin, said Powell, it is always gratifying to see kids come for a visit, knowing they’ll see their mom and dad. A child always wants a parent to love and care about them.

Powell praised the support of the community in expanding the offerings of Joyful Connections.

“Whether we need toys and books for the kids, or furniture to expand our space, everything we have has been donated or purchased with grants from the community.

“Sometimes it can be small things, like Lysol wipes for cleaning toys after the kids have visited. They’re very expensive, and we’re grateful when people drop off Lysol wipe, games, toys and needed supplies.”

New Director Shannon Strouse already knows the territory. A native of Oak Harbor, Strouse has attended Owens Community College and the University of Toledo and began working for TNT Mentoring in Port Clinton as a volunteer. She became program director in 2013 before joining Joyful Connections at program manager.

“There is some stress working for Joyful Connections and being the middleman while trying to bring families together,” noted Strouse. “The parties sometimes don’t get along, and we can hear the stress in their voices. Our job is to make sure the sessions are balanced, and stays safe and happy.”

The children are usually very happy to see mom and dad, said Strouse.

“They’re excited to come for a one or two hour session.’ she said. “With no electronics or television allowed, the parents play games, read and color in books with their children, allowing for a completely uninterrupted time with the family.”