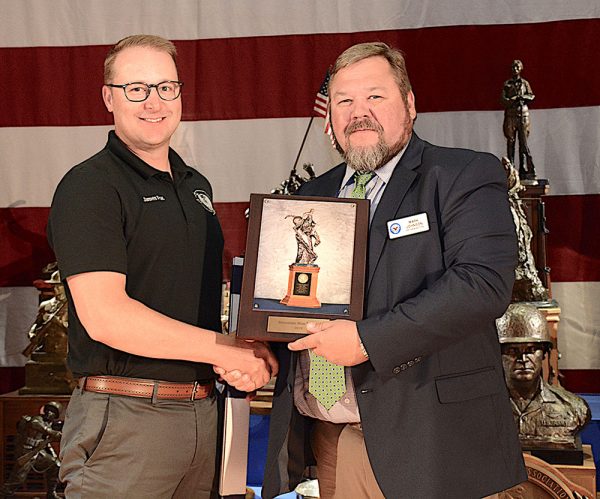 James Fox, 34, of Albany, Ore., was a frequent guest onstage at the National Trophy Rifle Awards at the conclusion of the 2019 CMP Cup and National Matches, thanks to consistently great performances in July and August.

Fox, who began his highpower rifle career as a teen in the 1980s, competed in several CMP Cup Matches and National Match events. It’s part of the most prestigious annual national pistol and rifle championship events held at the 113-year-old Camp Perry, the Ohio National Guard training site on the shore of Lake Erie west of Port Clinton.

During his time on the firing lines at Perry, Fox sent several hundred rounds downrange from July 25 to the close of highpower rifle competition on Aug. 2. Despite an 11-year hiatus from shooting, coming back into the sport in 2017, Fox had little difficulty shaking off the rust to rise to the top of the civilian ranks.

In the CMP Cup Matches, which was shot on electronically scored targets on Viale Range, just prior to the National Matches (on paper targets), Fox shot a pair of 1,000-point aggregate matches with scores of 984-33X and 996-63X, July 24-25. On the first day he was overshadowed by Matthew Eden by X-count, 984-43X to 33X, but Fox prevailed after the second day with an aggregate total 1,980-96X of a possible 2,000 points.

The event consisted of a combination of standing slow-fire, sitting rapid-fire, prone rapid-fire and prone slow-fire competition over two days.

“The President’s 100 match did not go the way I wanted. It started out rough in standing, shooting a 95-3X. While that score can be attributed to the wind, I don’t think that was the only reason. The P100 brings out the nerves more than any other match I’ve shot in,” said Fox.

Fox continued shooting well, placing 13th overall in the President’s 100 in a field of 1,063 competitors. He made the prestigious 10-shot shoot-off amongst the top 20 competitors and his final score of 386-11X out of a possible 400 was just four points behind SSG John Coggshall, U.S. Army National Guard, who won the trophy with a total of 390-14X on a wind-swept day.

“Going into the Trophy match week after winning the CMP National Cup aggregate, my goal was to win the Mountain Man Trophy to become the overall winner of the National Trophy matches,” Fox said.

“I have always felt that I have been more of an aggregate shooter than a single day shooter, as I tend to have consistent scores day by day, and can wear down the competition.

“I got lucky at 600 yards with the wind conditions being the most favorable on my relay. After all the shooting was done, I was quite happy and surprised that I made the shoot-off,” Fox said.

“Alas, the wind in the shoot-off got the best of me, as I could not seem to get ahead of the changes. After the match I was very happy to find out that John Coggshall won – we competed as juniors back in the day, and I felt that he is one of the nicest competitors on the line,” Fox said.

Fox’s President’s Rifle and National Trophy Individual (NTI) match aggregate scores earned him the Alice Bull Trophy, awarded to the high scorer in that pair of National Trophy events. His total 496-23X placed him fourth in the NTI, finishing second in the civilian field to fellow Team CMP shooter, Nick Till, 34, of Howell, Mich., who was awarded the Nathan Hale Trophy.

“The morning of the National Trophy Individual match I was relieved the wind was much calmer. I still found myself struggling to hold the rifle still. Looking back, I don’t think I’ve ever worked as hard as I did that day to shoot a 99-0X,” he said.

In prone rapid at 300 yards, Fox said he got the wind call spot-on, firing a 99-7X. Having dropped two points heading back to 600 yards, Fox said he felt he was out of the hunt for the win on the day, and then focused on keeping himself close for the overall aggregate.
“I was able to stay ahead of the wind at 600 after going on light for the first shot and shooting a nine. The second nine was out the top. Finishing with a 496-23X I was certain that I was nowhere close to the top,” he said.

Fox, Till and Sara Rozanski, all Team CMP members, finished in the top three civilian places (third through fifth overall) in the NTI, with Till second and Rozanski in third as High Woman, receiving the Women’s Trophy.

“At the end of the day, given how many excellent shooters there are competing, it’s tough to be able to place in the top 10, much less the top 5, and having all three of us right up there is quite the feat,” Fox said.

In the National Trophy Team (six-person) rifle match, Fox was the high individual scorer in the match with a score of 497-28X, just three points away from a perfect score in his string of 50-shots. His Oregon State Shooting Association team finished third, just seven points behind leader Texas State Rifle Association.

As the high individual in the team match, Fox received the Pershing Trophy in honor of US Army General John “Blackjack” Pershing.

As the high civilian firing in the National Trophy Individual (NTI) and Team (NTT) matches, Fox took home the Pietroforte Trophy with an aggregate score of 993-51X of a possible 1,000 points. In the three-match aggregate of the President’s Rifle, NTI and NTT, Fox earned the Mountain Man Trophy with a combined score of 1,287-60X.

The Oregon standout was second in the Overall Individual Service Rifle standings and High Civilian, posting a total score of 1,577-71X. That combination includes the President’s, NTI, NTT and Hearst Doubles matches. SFC Brandon Green of the US Army Marksmanship Unit placed first with 1,580-66X.

“The entire week, I found myself thinking about how great all of the shooters are, how we help each other out even if we are in competition, and the level of competition that exists is mind blowing. You have to be near perfect in this group to be able to take the top honors,” said Fox.