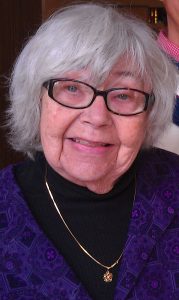 Robert Henry Bonhard and Pauline Simkins Bonhard
Laura Emily Pauline Simkins Bonhard passed away on May 16, 2019, at home in Prescott Valley, Ariz., with her family at her bedside. Born in Dennison, Ohio, on July 24, 1926, the only child to Don Carlton Simkins and Emily Anna (Hall) Simkins, the family moved to Mt. Cory, Ohio, when her father accepted the Mt. Cory School superintendent position. Pauline started and graduated from Mt. Cory School.

Pauline held both undergraduate and graduate degrees from Bowling Green State University, Ohio. Later, she would complete another masters in Library Science. Pauline taught, then became the school librarian at 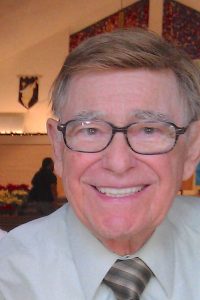 Pandora-Gilboa Schools and later at Arcadia Schools, for a total of 22 years. She was an active member of Mt. Cory United Methodist Church.

Robert Henry Bonhard passed away on July 18, 2019, at home in Prescott Valley, Ariz., with his family at his bedside. Robert was born in Brooklyn, N.Y., the only child to Henry Bonhard and Helen Agnes (Treisner) Bonhard on July 22, 1926. He graduated from Richmond Hill High School in Queens, N.Y. Robert graduated from Bowling Green State University, Ohio, and became a teacher for 26 years, mainly in the Bath Schools (Lima) as well as Findlay Schools.

With the spirit of an entrepreneur, Robert built and rebuilt five houses, owned the Wagon Wheel Antique Shop for five years, and was in the yacht business for over 20 years. Buying yachts from all over the world led to 36 trips to Taiwan. His love of antiques never diminished; he continued to buy and sell antique clocks. He loved sports cars, as well as antique cars, and collected old coins and stamps.

Pauline met Robert at Bowling Green State University and the two soon realized they were soulmates. They were married Oct. 24, 1948, in the Mt. Cory church of her youth. Upon graduation, they returned to live in Mt Cory, were teachers in the area, and soon started their family of five children. After the kids were grown, the couple moved to Port Clinton, Ohio, where they worked to grow a sailboat business on Lake Erie.

Always adventurous, the couple moved to Lake Chapala, Mexico, for five years and enjoyed life with the many expats there and the warm temperatures. In 2002, the couple left Mexico, and chose to relocate to Prescott Valley, Arizona, for their retirement years.

Pauline loved gardening, especially roses. She was an avid reader, and played piano and violin. She and Robert enjoyed traveling to Europe, Great Britain, Taiwan, Florida, Hawaii, Alaska, and Mexico. They enjoyed long walks together hand in hand everywhere. They were especially fond of picnics with their family and, in earlier times, family camping trips to Lake Erie and throughout the east coast. They felt fortunate that they continued for 70 years their lifelong love affair.

Family and friends are invited to a celebration of life service on Saturday, Sept. 7, at 12 Noon at Mt. Cory United Methodist Church, Mt. Cory, Ohio. Donations can be made to Boys Town, Doctors without Borders, or the National Parks Conservation Association.