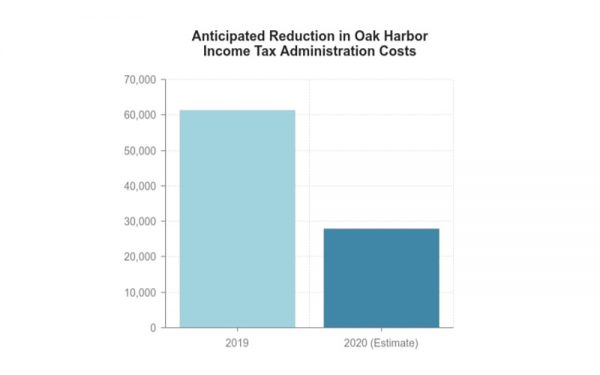 The Village of Oak Harbor has been studying a proposal to eliminate its position of income tax administrator and move those duties to the Regional Income Tax Agency (RITA), a service used by many Ohio communities.
“When we started this process, we just really wanted to make sure the tax office worked for residents and taxpayers,” said Oak Harbor’s Fiscal Officer Amy Drummer, who manages the tax office. “After reviewing the options, we were really surprised that outsourcing seemed like such a good option.”
Following the resignation of the village income tax administrator in June, the village began exploring whether outsourcing income tax administration would be beneficial. After extensive research, the village determined that it could acquire numerous benefits at a reduced cost.
In general, agencies such as RITA offer online filing, extended hour phone lines during tax season, site visits, and reduced administration costs. From official cost estimates provided by RITA, a non-profit agency operated by a council of Ohio governments, the Village of Oak Harbor would reduce administration costs from around $60,000 to $28,000 or less.
“Currently, we spend about 7.5% of our income tax revenues on the cost of collecting income tax. Moving to RITA would reduce that to 3.5% or less. If we can do that while making the process easier, it’s almost a no-brainer,” said Mayor Quinton Babcock.
The Village Council will have a third reading of the legislation at their regularly scheduled meeting on Tuesday, Sept. 3 at 7 p.m., at which time they may vote on the legislation.
“While I believe the benefits are numerous, this would certainly involve a transition for anyone who lives or works in Oak Harbor, so we would love to have your attendance,” said Mayor Babcock in a recent Facebook post. You may also contact Mayor Babcock with questions or concerns by email at qbabcock@oakharbor.oh.us or phone, 419-635-7560.
Official cost estimates indicate that Oak Harbor’s income tax administration costs would be reduced to 47% of their current levels by contracting with the Regional Income Tax Agency.
The Village of Oak Harbor is a public power community of approximately 2,700 residents that employs around 30 area residents throughout its police department, public works, and public power operations. Oak Harbor is focused on its vision to enhance the quality of life of its residents by providing a clean and safe community.
RITA is a non-profit governmental agency established in 1971 under Chapter 167 of the Ohio Revised Code and is the largest municipal income tax collection agency in the State of Ohio. Currently over 300 Ohio cities and villages (approximately 50% of Ohio municipalities with an income tax) utilize RITA to handle their municipal income tax collection and enforcement efforts.