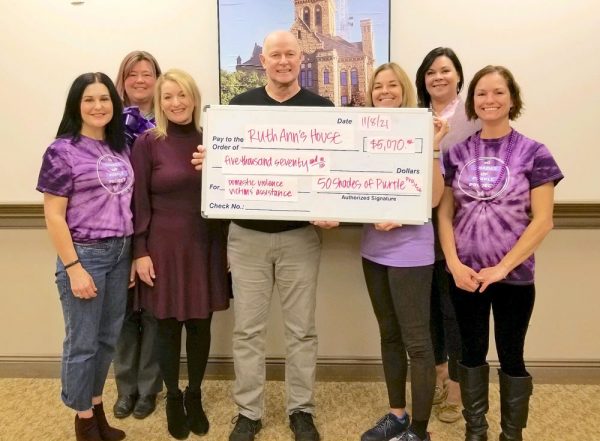 The recent 50 Shades of Purple Project inaugural event raised $5,070 to donate to Ruth Ann’s House, a transitional housing program for women and their children in Ottawa County.

The funding was raised with a Port Clinton City scavenger hunt whose goal was to raise awareness about a dark topic in a lighter way. With 15 teams participating in the event. organizers raised awareness about domestic violence, and were thrilled that it also raised money to help victims and survivors.

Corrine McRitchie, the chair of the committee, works as a victim advocate for the Family and Child Abuse Prevention Center.

“What does domestic violence awareness mean to you? I believe that awareness equals knowledge and knowledge equals power,” said McRitchie. “If you have the knowledge and resources to make the best decision about your abusive situation, you have the power and increased ability to get out of that relationship as safely as you can. Not every dangerous situation calls for the same type of resources.

“Having an advocate or someone to help support you can make all the difference.  And that’s what this project is all about: bringing that awareness and power to the abused.”