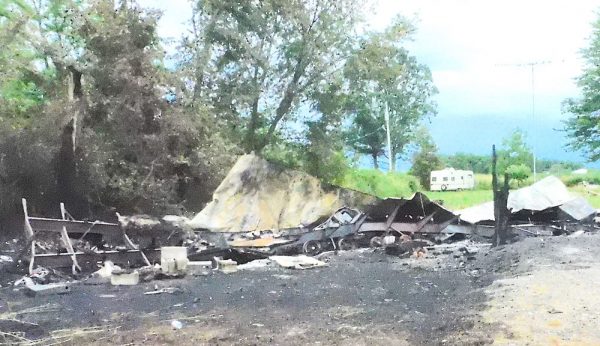 State investigators have determined that arson was involved in a July 3 fire that consumed a mobile home and resulted in an injured firefighters. (State Fire Marshall’s Office)

The Division of State Fire Marshal’s Fire and Explosion Investigation Bureau is asking for the public’s assistance identifying those responsible for an Ottawa County arson that occurred Sunday, July 3 at approximately 10 p.m. at 8300 W. Genzman Rd., Oak Harbor.

Investigators say firefighters with the Carroll Township Fire Department arrived at the scene to find a mobile home fully engulfed. One firefighter suffered heat exhaustion, and another received a leg injury while trying to extinguish the blaze. Both firefighters were transported to an area hospital for treatment.

Firefighters say the vacant mobile home is now considered to be a total loss.

The Blue Ribbon Arson Committee is offering a reward of up to $5,000 for information leading to the arrest and conviction of those responsible for this fire. Contact the Ohio State Fire Marshal’s Office at 800-589-2728.