5,000 veterans honored during Wreaths Across America 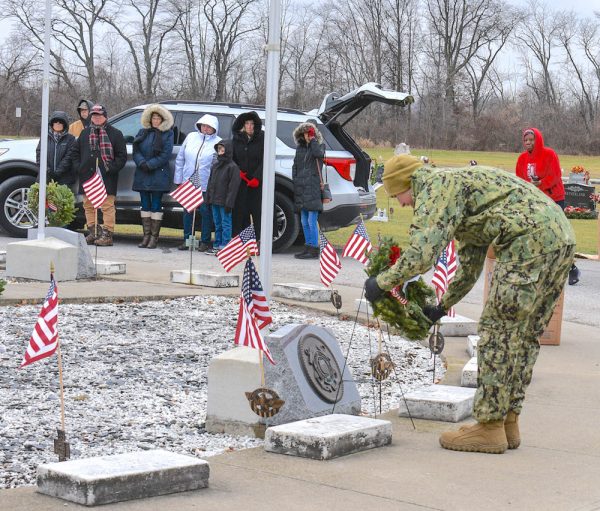 A member of Port Security Unit 309 lays a wreath to honor Coast Guard veterans. Each branch of the military was honored with a wreath. (Photo by Sheri Trusty) 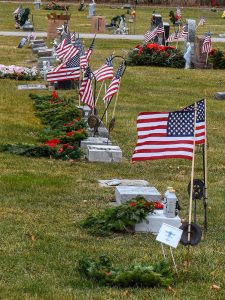 Nearly 5,000 wreaths were laid at veterans’ graves in Ottawa County cemeteries during Wreaths Across America. The event helps Americans remember the sacrifice and service of military personnel. (Photo by Sheri Trusty)

Dozens of people gathered at Riverview Cemetery to lay wreaths on veterans’ graves on Saturday, Dec. 17 as part of the national endeavor, Wreaths Across America. Thousands of people across the country honored veterans with wreaths on the same day, and at the same time.

It was, said Nate Holman, not a time to think about their deaths but was a way to remember their service.

Holman, a member of the Ottawa County Wreaths Across America team, hosted the ceremony at Riverview Cemetery. He said that about 4,800 wreaths were laid in county cemeteries. The group that came to Riverview to honor veterans included VFW Post 2480, Port Security Unit 309, community leaders, and dozens of individual volunteers.

Among them was Marine veteran Tiara Palardy, a Port Clinton resident who has two sons currently serving in the military.

“It’s amazing. It’s touching,” Palardy said as she stood among a large group who had come to honor veterans. “When I went into the service, coming from a small town, it was a big thing. Not a lot of people did it.”

Bataan Primary School Resource Officer J.R. Cipiti is an Army veteran who attended the event with his wife, Mary Ann Cipiti, and their granddaughter, Layla Rivera. For J.R., the event was a way to help ensure the public doesn’t forget the sacrifices made by veterans and by active duty military personnel. 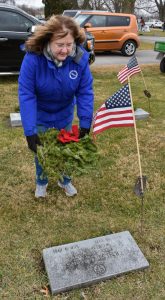 Sandye Ostheimer was one of dozens of volunteers who laid wreaths at Riverview Cemetery on Saturday, Dec. 17. (Photo by Sheri Trusty)

“This means a lot, with everything going on in the world right now. Our military men and women need our support, and we need to remember the folks right here,” he said as he stood amongst the graves. “We need to remember what they did for us.”

Vietnam War veteran Ernie Hopkins attended the event with his 10-year-old granddaughter, Ali Vollmar, who said she “came to support my papa.” Like many Vietnam vets, Hopkins faced disgrace when he returned from the war. His sacrifices were unacknowledged, and his service was shamed.

Although Vietnam veterans are honored today, the shadow of America’s early ignorance and callousness still remains. Events like Wreaths Across America help to shine light into that shadow.

“We went so long with no support and no honor,” Hopkins said. “Now, they’re realizing what our service meant to America.” 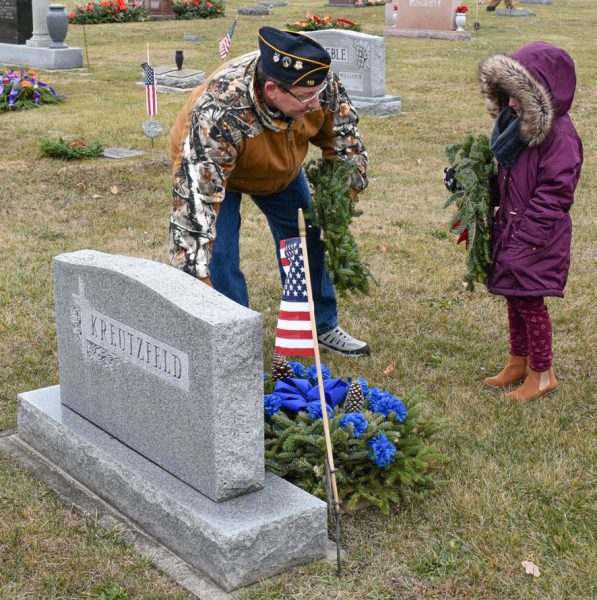 J.R. Cipiti and his granddaughter, Layla Rivera, lay wreaths at Riverview Cemetery during Wreaths Across America. (Photo by Sheri Trusty)