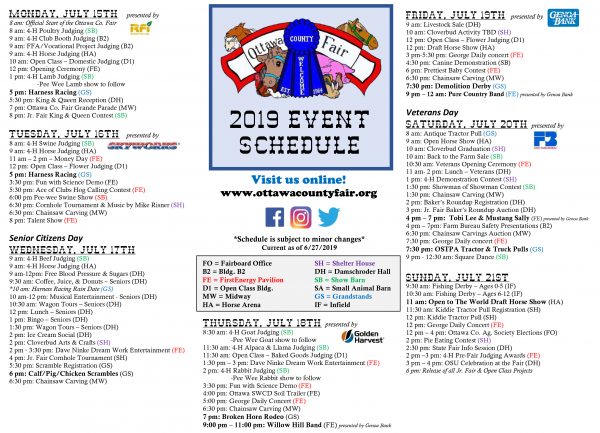 All of the ingredients for the 55th Ottawa County Fair are in place for Monday’s opener of the week-long down home extravaganza, and then some, thanks to improvements to FirstEnergy Pavilion and the kid’s show barn.

“We’re delighted to have been able to make improvements at the FirstEnergy Pavilion, including a new concrete floor, and installing much-needed fans in the show barn,” said fair executive Mike Libben. “The Genoa Bank Concert Series will have some great bands on stage at FirstEnergy Pavilion on Thursday and Friday at 9 p.m., and Mustang Sally is appearing on Saturday at 4 p.m.”

On Thursday, the Willow Hill Band will be on stage, and Pure Country is featured on Friday evening. Commemorative bricks are also still being sold in an effort to pave the FirstEnergy Pavilion’s porch.

The young folks who show off their livestock in the show barn will certainly appreciate the new fans that have been installed there, thanks to the Junior Improvement Fund organized by the late Kathy Booher. Two 14-foot diameter fans will keep the kids and their critters cool on hot July afternoons.

As usual, the Ottawa County Fair will begin with a couple of afternoons of harness racing on Monday and Tuesday, with a first race post time of 5 p.m.

The Ottawa County Fair has a full schedule on Monday through Sunday, including the popular tractor pulls on Saturday night, the kids calf, pig and chicken scrambles on Wednesday night, and the livestock sales and demolition derby on Friday. See the schedule on page 6A.