Margaretta’s balanced attack leads the way in defeat of Danbury 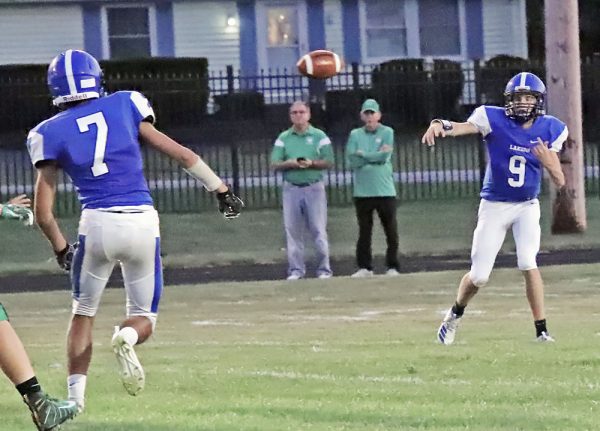 DANBURY TWP. — Margaretta took control from the outset, scoring 28 points in the first quarter as it defeated Danbury, 55-0. The Polar Bears (2-2, 1-0 SBC River) led 28-0 after the first quarter and 41-0 at halftime as it steadily gained control of the game.

Mitch Raifsnider connected with Spencer Michel on a 19-yard touchdown pass early in the first quarter to open the scoring, and Raifsnider scored on an interception that was returned for a touchdown on the ensuing drive.

“They’re good, they don’t have a whole lot of weaknesses. As long as they can stay healthy, they’ve got a lot of nice pieces. They have the ability to run the ball and pass the ball,” said Danbury coach Keith Mora. “They’re a tough team to game plan for and they played a tough style of football.”

The Lakers (0-4, 0-1) had to play without six starters, including quarterback Kaden Conrad.

“We had six starters out with injuries, and with 25 guys on our team, we have 19 kids available to us. It’s absolutely what it seems like — we’re outmatched, (and) we have to play a near-perfect game to withstand something like that,” said Mora. “We had a lot of guys banged up and that makes it really tough when you’re trying to game plan. We do feel like we could move the ball on them, but we have a sophomore quarterback who hasn’t played much, and it just makes things really tough.”

Despite the rough start to begin the season, Danbury has stuck together as a unit and not let the losing overcome them.

“We’re going through a lot right now, it would be really easy for guys to pack it in and be done. That hasn’t been the case. We had a good week of practice heading into the Margaretta game. We needed every one of those guys to work for each other, and they did that. When you look at the individual performances, there were some guys who did some really nice things, (and) you can take that away and continue to build on that.”

The Lakers travel to Gibsonburg to take on the Golden Bears, who are 4-0 and are coming off a 31-14 victory over Tiffin Calvert. Gibsonburg is coached by Mike Lee, who was used to be the offensive coordinator at Fostoria High School, where Mora was the ball boy as a kid.

This might be one of the best Gibsonburg teams I’ve seen,” said Mora.

“My message to the team was, force them to turn the playbook page, make sure you can stop the best two or three run plays. That’s what we talked about at practice — these are the three run plays that we’re going to do.” 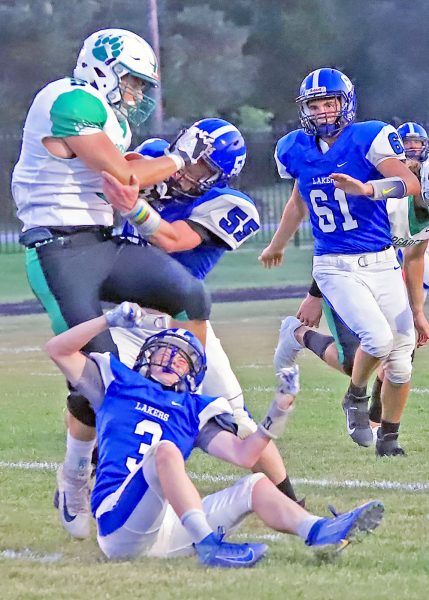 Danbury’s Everett Overmyer (55) and Cade McCarthy (3) tackle Margaretta running back Brucetyn Hedden as Brandon Wundere comes to assist on the play. The Lakers were defeated 55-0 on Friday evening 55-0 at Biro Fields.