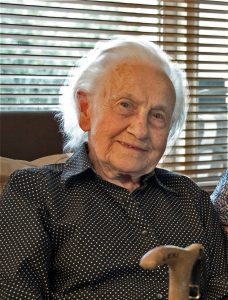 Helen Barnum Frye — scholar, traveler, and force of nature — passed away peacefully on Sept. 13 at age 96.

Helen was born in 1923 in Port Clinton, to John and Jennie (Washburn) Barnum. In 1943, she married her high school sweetheart, John “Jack” H. Frye, and they raised one son, John Jr. Helen and Jack spent 52 years together, until his death.

Education was Helen’s calling in life. The valedictorian of her Port Clinton High School class, she went on to earn degrees from Ohio Wesleyan and Wittenberg as well as a PhD from Ohio State University. After employment at Wright Patterson AFB and Fairborn public schools, she joined the University of Dayton Teacher Education Department. There she spent the rest of her career teaching the next generation of educators, leaving as Professor Emeritus.

After retirement Helen and Jack returned to Catawba Island, but she never stayed home for long. Her love of travel took her to countless countries on all seven continents where she became an accomplished photographer and made friends around the world. When at home, Helen kept active in community organizations including Friends of Ida Rupp Public Library, Holiday Bureau, Trinity United Methodist Church, and the Red Cross. She spent her final years in California near her son and his family.

Helen was preceded in death by her parents and her husband. She is survived by her son John, daughter-in-law Joanne, and grandchildren David and Erica. Graveside services will be held 11 a.m. on Oct. 5, at Catawba Island Cemetery.  In lieu of flowers, donations may be made to Ida Rupp Public Library Fund of the Ottawa County Community Foundation or the Catawba Island Township Volunteer Fire Department.  Neidecker, LeVeck &  Crosser Funeral Home, Port Clinton is assisting the family with the arrangements.  Online condolences may be shared with the family  at www.neideckerleveckcrosser.com .