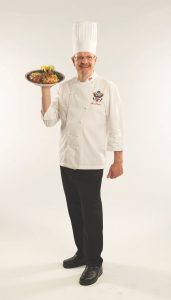 Learn to cook food fit for a president during a cooking class with a former White House Chef John Moeller in the historic Hayes Home on Saturday, Oct. 5, during the American Presidents Film & Literary Festival.

Moeller prepared cuisine for three presidents, and will share his secrets for creating dishes for presidential dining from 10 a.m. to 12:30 p.m. and 1:30 to 4 p.m. During the class in the Hayes Home kitchen participants will make a soup, entree and dessert relating to food that has been served in the White House. Moeller will share some of his stories of working for Presidents George H.W. Bush, Bill Clinton and George W. Bush.

Participants then will enjoy that food in the Hayes Home dining room at the same table where President Rutherford and First Lady Lucy Hayes dined. Participants 21 and older also will receive a complimentary glass of wine. The cooking class is open to all ages.

Tickets are $125 and can be purchased online at https://americanpresidentsfilmfestival.org/ticketing/. Each class is limited to 15 people.

Moeller is a member of an elite corps of chefs who have served in the White House preparing cuisine for presidents, first families and their guests, including visiting heads of state. Moeller joined the White House kitchen in 1992 as sous chef to Pierre Chambrin and later Walter Scheib, eventually acting as White House Chef in 2005.

He served in the White House from 1992 to 2005, one of the longest tenured chefs across three administrations. He helped create and prepare meals for the first families, for world leaders like Tony Blair and Nelson Mandela, for famous guests like Julia Child and Sophia Loren, and for holiday parties and trips to Camp David.

Chef Moeller has detailed his journey and White House experience in his book, “Dining at the White House – From the President’s Table to Yours,” published in September 2013. He runs State of Affairs Catering in his hometown of Lancaster, Pa.

The festival is committed to providing a place for expanded national and international understanding of the history and current events that have and continue to shape and influence the President of the United States. Utilizing the site and community of America’s first presidential library and museum, filmmakers, film professionals and authors will inspire audiences to explore, understand, critique and analyze the people, places, politics and power surrounding the American Presidency.