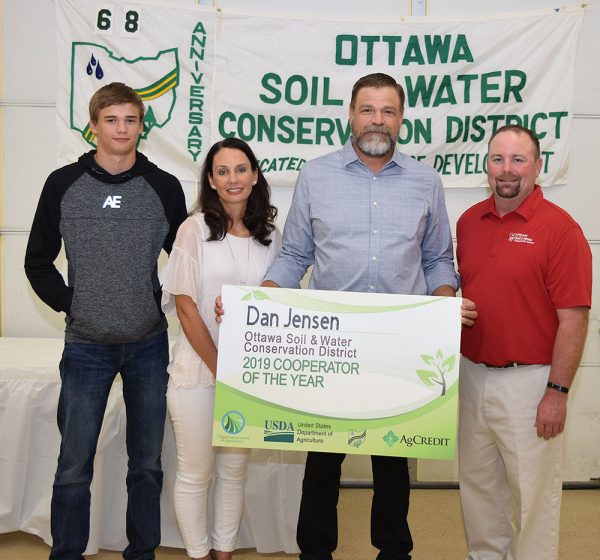 Dan Jensen, joined by his wife, Jennifer, and son, Troy, was honored as Cooperator of the Year at the 68th annual meeting of the Ottawa Soil and Water Conservation District last week at the Ottawa County Fairgrounds. Presenting the award was OSWCD Board Chairman Todd Hecht, right. (Photo by D’Arcy Egan)

The farming bug bit Dan Jensen when he was old enough to help his father work the soil and plant crops in western Ottawa County. It was an avocation passed down from father to son for generations, and Jensen is grateful his 16-year-old son, Troy, is showing the same passion.

Jensen, of Oak Harbor, was honored as Cooperator of the Year last week at the 68th annual meeting of the Ottawa Soil and Water Conservation District at the Ottawa County Fairgrounds.

“My dad started farming in 1967, with his interest coming from working as a young boy on his grandfather’s farm in Limestone, Ohio,” said Jensen. “My own interest began when I worked the farm alongside my dad, and now Troy is working with me.”

The superintendent of the Ottawa County Highway Department, Jensen and his wife, Jennifer, who also works full time, are always on the go, whether it is following their two sons as they wrestle for Oak Harbor High School or farming the land.

The multi-generational aspect of farming is a challenge, said Jenson, to responsibly farm while improving the soil health, retaining fertilizer and helping maintain water quality.

“We’ve doubled the size of our farm, growing corn, wheat and soybeans on about 600 acres,” he said.

“It is good that we have some diversity, and have government programs such as crop insurance as a tool to stay in farming,” said Jensen. “This past year wasn’t one that we would have wanted, but we have managed to stay in business and keep working. We’re ready to start fresh again next spring.”

OSWCD Board Chairman Todd Hecht presented Jensen with his award.

“Dan has worked hard to follow a strong conservation program for his farm,” said Hecht. “All the land he owns and operates has been signed up in the EQIP program, to install conservation practices. This includes precision nutrient management, cover crops and gypsum applications.

“Working with his agricultural retailer, he has had a nutrient management plan written and followed for all of his acres. He has also installed filter strips and water control structures on several farms.”

The OSWCD also held its annual election at the banquet, with Roland Sandrock voted to his 6th term on the board, along with Bill Hartman of Salem Township.