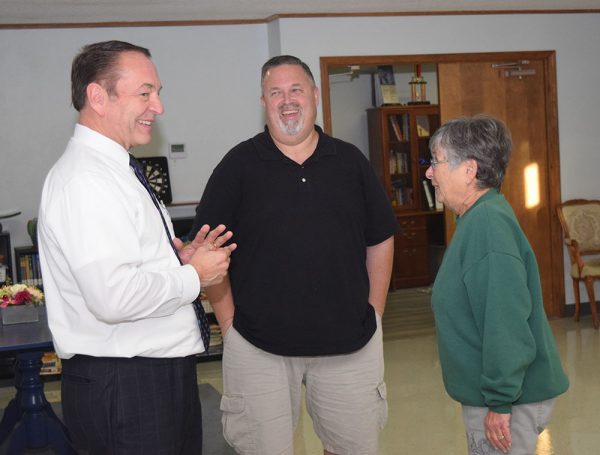 No more talk, get it done, say residents

The crowds kept getting smaller for Port Clinton City Council public meetings on a $19.2 million infrastructure plan by Poggemeyer Design Group of Bowling Green. At the fourth, and most likely the final public hearing held at the Ottawa County Family Advocacy Center on Thursday, there were only about 30 interested residents on hand.

“I’m absolutely in favor of the plan,” said Judy Crosser, the wife of long-time judge John R. Crosser (1981-92) who has lived on the west side of Port Clinton with her husband for more than 40 years. “It’s time to fix things. Waiting any longer will just cost the city even more.”

Crosser remembers past mayors trying to make a difference, and failing. None could get the backing of the voters for a wholesale renovation of the city streets, as well as city sewers and storm water lines.

“Most of the city officials always told us, ‘if the system ain’t broke, don’t fix it.’” Crosser said. “Well, now it’s really broke.”
Provoking the change in attitude, said some in attendance, has been the miracle of Madison Street.

Madison Street is considered Port Clinton’s primary business district. Over the last few years, much has been done to make it an appealing place to visit, from new roads and broadened sidewalks to tearing down a dilapidated building that had long been an eyesore.

Residents and visitors gave the new thoroughfare good reviews, businesses were rejuvenated, and now the new MORA District has been created to allow open alcohol containers that will benefit downtown businesses and events.

“If we can improve the rest of the downtown area like we have Madison Street, it will make a big difference,” was a familiar comment at the public hearing.

Initially, Mayor Mike Snider had proposed seeking approval for the expensive infrastructure plan by placing it on the ballot, a bid for transparency with voters. A common thread at the three public hearings that have been held was a citizenry that not only approved the plan, it did not want to wait a year to get started, a move that could add about $1 million to the cost.

Many in attendance would much rather Port Clinton City Council vote on the infrastructure plan. Mayor Snider said if that was the case, council could propose legislation. He would be against introducing it as emergency legislation to ensure there would be input from residents and without a rush for approval.

Also changing minds was a presentation by Jack A. Jones of Poggemeyer Design Group pointing out that the time is right to be able to get low interest loans and government grants to help pay for the expensive project.