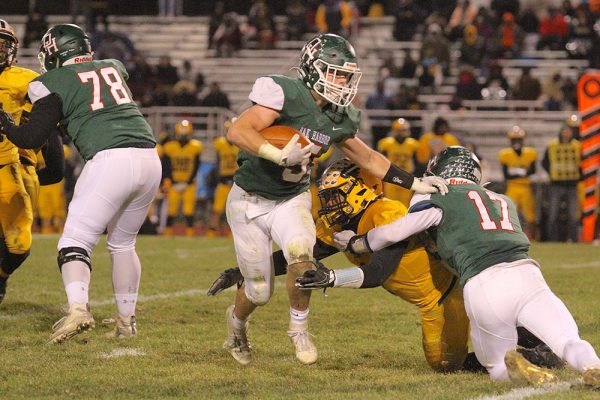 Clay Schulte of Oak Harbor, named the SBC Conference Most Outstanding Performer for 2019, picks up some yard against Beachwood High School in a 41-7 victory. (Photo by Julie Overmyer).

“I actually found out when Jac (Alexander) texted me and told me congratulations,” said Schulte. “I found out from Jac and I looked on our Twitter football page and saw it.

Schulte talked about what it meant to earn that special distinction for the second time.

“It means a lot,” he said. “We have a great conference and a lot of great players, and for them to unanimously pick me, it lets me know all of my hard work has paid off.”

Schulte, a three-sport athlete who also plays basketball and baseball, talked about his love for football.

“I love the physicality of it. I love playing, I can’t really describe it,” he said. “There’s nothing like being on the field before the whole town playing football.”

Tommy Owens was named to the second team as a wide receiver and Everett Overmyer (defensive lineman) and Brady Lenthe (defensive back) also earned second-team honors.