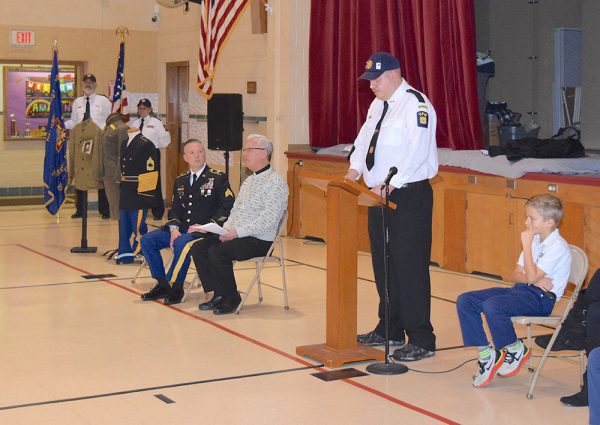 Local veterans were honored at Immaculate Conception School as the Veteran’s Day weekend began last Friday, a program that focused on the heroes who served in the Army, Navy, Air Force, Coast Guard and Marine Corps. With military uniforms of past wars standing at attention, fourth grader Thaddeus Wierzba helped students to share their thoughts.

“All of (the veterans) have worked together to protect our country,” said Wierzba, whose family includes a number of veterans, including one who was a prisoner of war during World War II.

“A veteran has to be tough, strong and really brave,” Wierzba told the assembly in the Immaculate Conception gymnasium. “Veterans love our country so much that they would be willing to sacrifice their lives to save (our country.)”

Fifth grader Lorelei Fall, whose father was in uniform at the assembly, told the students that members of the U.S. military did not go to battle because they had to do it. They fought for this country, she said, of their own choice to preserve our freedoms, despite the risk of dying.