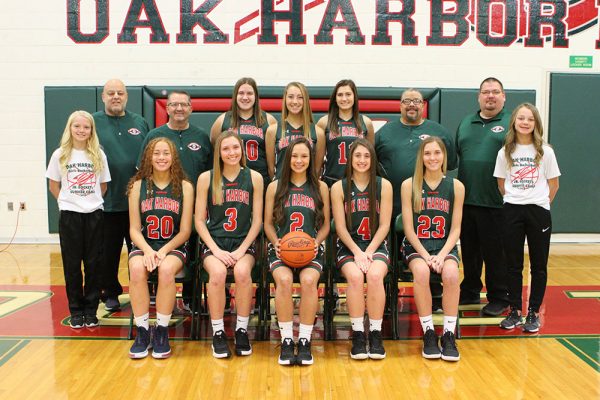 Forecast: In Tom Kontak’s seven years coaching at Oak Harbor, the Rockets have had six winning seasons, won five sectional titles, plus a district championship and a league title.

Last year was an aberration. Oak Harbor finished 10-13 and failed to win a sectional title. They lost one of their best players in Logan Harris (11.1 ppg, 9.7 rpg, 3.1 bpg) to a torn ACL midway thru the season and struggled down the stretch.

This year, Oak Harbor will be without the services of Ryann Steinbrick (14.4 ppg, 4.3 rpg), who tore her ACL. But the players that do return should give Kontak reason to be cautiously optimistic. He’s one of the area’s best coaches, has a career record of 217-89 (.709) and holds the record for most wins in program history.

The Rockets have been smaller and more athletic at times in the past, but now they feature plenty of height. The team, which is rather inexperienced, has four players that are 5-9 or taller.

Glaser played in just 11 games last season, Domanowski hasn’t played since her freshman year and Taylor was in junior high a year ago.

Kontak expects his team to have some growing pains because of their inexperience, but wants them to steadfastly remain focused on getting better and playing hard.

“The key to this year’s team will be for each player to understand their individual role, accept that role, and then be able to compete within that role at a high-varsity level. For the majority of our players, this will be their first experience playing in a full-time role as a varsity player,” said Kontak. “There will be times when our inexperience will show, but there will also be times when you will see the athletic ability of this group shine. The biggest challenge for this group will be to take their inexperience and understand that when things don’t go as planned, you have to get back up and keep moving forward.

“What we’ve done is concentrate on what we need to do and what’s important to be successful, and what our roles are. It’s about fitting the pieces together.”

Playing hard-nosed zone defense is a staple of any Kontak team. It can come in the form of a 3-2, a 1-3-1, a traditional half court trap or a three-quarter court press.

Another tenet of a Kontak team is playing with energy and giving 100% for the entire game.

Margaretta was picked to win the Bay Division, and Willard was tabbed to finish second. Edison is expected to finish third, followed by Oak Harbor, Huron and Port Clinton.