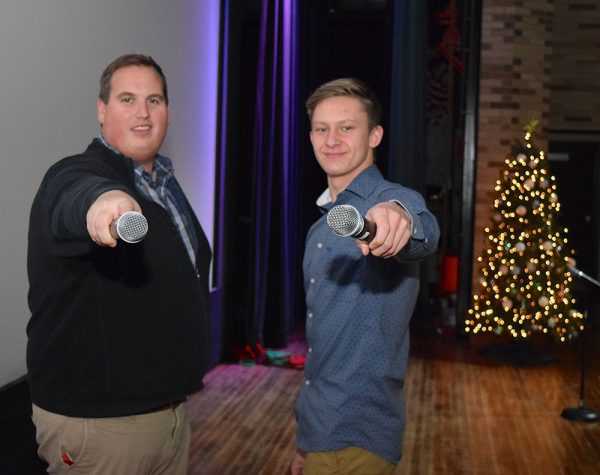 Language Arts and Speech teacher Joe Miller has captured the interest of his students at Port Clinton High School with the debut of RED Talks, converting the popularity of the TED Talks that are sweeping the country into another feature of the culture-changing R-Factor that has made a difference in the Port Clinton School System.

“The RED Talks are simply our version of the TED Talks, giving a student an 8-minute window of opportunity to make a succinct presentation of a certain point of discussion,” said Miller. On a recent Tuesday afternoon at the Performing Arts Center it was student Garrett Hirt’s turn, with the topic “Diffidence is Futile.”

A large audience of students, sprinkled with a few adults, proved the talks have already become popular. The round of applause when Hirt was introduced assured an interested audience.

Hirt made his point that “a lack of self-confidence will only hold you back in life,” using his experiences on the Port Clinton High School swim team as his prime example. Gaining confidence as a swimmer, he said, has improved his athletic performances and helped him to boost confidence other life experiences.

“Garrett spent a good deal of time preparing for his talk, and it showed,” said Miller. And the popularity of the first three talks have increased the size of the audiences, as well as piqued the interest of other students.

“The really cool thing is that students have asked me about their doing a RED Talk in the future,” Miller said. He thinks the RED Talks will help Port Clinton to develop elite students who able to step out of their comfort zone and take the stage in front of a crowd.

Emily Feuhrer did the first RED Talk on the serious subject of “Saying the ‘A’ Word,” a treatise on how autism affects people all around us, and it’s time to talk about autism. Cassidy Stroupe chose “Beauty in Ugly,” that focused on what we perceive as bad or ugly can truly be beautiful.

“We plan to have more RED Talks in the future, and are hoping to include more of the student body, and perhaps even outside speakers,” said Miller. “We’ll be listing all of the future RED Talks on the school web sites (www.pccsd.net and Facebook).”

The RED Talks are a progression of E + R = O, an Event + Response = Outcome culture change program at the Port Clinton City Schools. The impact on students of all levels, say school officials, has been incredible. The goal is to continue implementation of the “R-Factor” training at all levels.