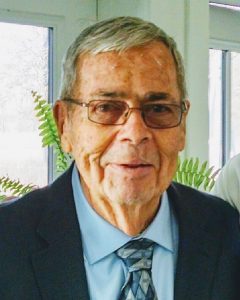 He was born Feb. 9, 1938 in Bucyrus to the late Charles W. and Mary (Geiger) Kimerline Sr. and was a 1956 graduate of Bucyrus High School. Butch continued his education at Bowling Green State University, where he graduated with a bachelor’s degree in business and was a proud member of the Sigma Chi Fraternity. He returned home and, on June 11, 1960, married Carol B. Kiess. They shared nearly 44 years of marriage until her death in 2004.

Butch, as known by many, put his business degree to good use by carrying on The Bucyrus Road Materials family business. He had the privilege of working with his father, brother Reg, son, grandsons and many valued employees over his 50 plus year career, paving a lot of ground throughout the area. In 1970, he and his brother Nelfred formed BuEComp Inc., a business that creates quality tubing and is still thriving today.

Butch was a man of strong faith and an active member of Good Hope Lutheran Church. He served on the board of directors for many years at Farmers Citizens Bank and Oakwood Cemetery, was a 32nd degree Mason and a 50-year member of the Bucyrus Shrine Club. But of all the jobs and memberships Butch held, he was best at being a family man, especially a grandpa. He saw to it that his grandkids were a vital part his life and, in more recent years, he enjoyed the weekly Boys Night Out. This led to much laughter and bonding. He loved being at their family condo in Port Clinton, where he liked to boat and fish and found peace in simply watching the waves roll in as well as watching storms pass over the lake. He and Carol traveled extensively, with Charleston, SC being a favorite spot. They attended many OSU football games as longtime season ticket holders and for relaxation, Butch enjoyed reading, especially Civil War history.

In addition to his parents and wife, Carol, Butch was preceded in death by a granddaughter, Caitlin Hornung and a sister-in-law, Janet Kimerline.

Donations can be made payable to either Caitlin’s Smiles, (an organization founded following the death of his granddaughter; helping children with chronic and life-threatening illnesses by giving them hope, laughs and smiles) or Good Hope Lutheran Church. These gifts will be accepted through the funeral home or at church on the morning of services. Expressions of sympathy are encouraged to be shared at www.wisefuneral.com.