A day full of science at Put-in-Bay Schools 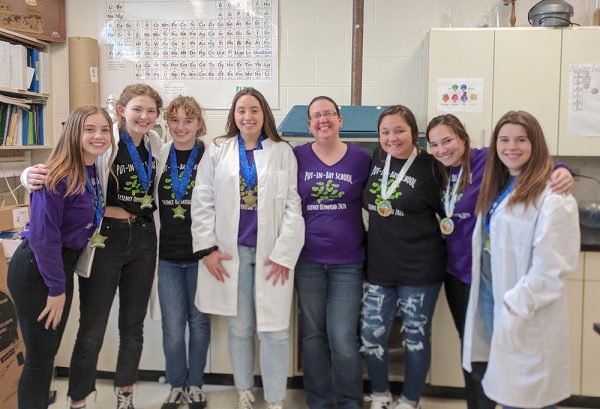 The 6th annual Put-in-Bay School Science Fair held recently under the direction of science teacher Missi Kowalski had Put-in-Bay students in grades 7-12, along with Kelleys Island’s only high school student, complete science projects that were based on criteria set by the Ohio Academy of Science.

Projects were judged by 15 professionals, all with varying backgrounds in science, technology, engineering, and mathematics (STEM). Students that received an overall score of “superior” will be moving on to the District Science Fair that will be held at the University of Toledo on March 7.

Upper elementary and high school students participated in a variety of science related games and activities in the style of Science Olympiad. The student that accumulated the most points throughout the day received the coveted “Newton Cup.” This year’s overall winner was senior Joseph Byrnes.

High school students also spent time throughout the day engaging in activities with the elementary students to help get them excited about STEM fields. Some activities included the construction and testing of ferries (grades 2-3), blasting off to Mars with balloon rockets (grades K-1) and the chemistry of acids and bases (grade 4).

Students in grades K-12, as well as community members, competed in the Pinewood Derby that takes place at the end of the day. This year proved to have some fierce competition, with the final winner being determined by slow motion video replay.