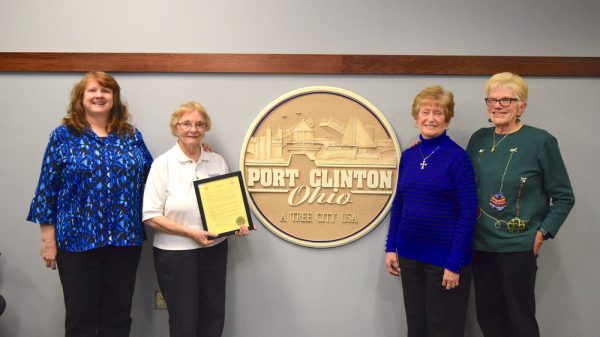 Edna Hansen was honored for her 18 years as the treasurer of the City of Port Clinton at last week’s council meeting, which included a proclamation by Mayor Michael J. Snider. From left to right are her daughters Linda Overstreet of Fremont, a retired school teacher, Edna Hansen, Third Ward Councilwoman Margaret Phillips and long-time friend Jolyn Smith of Fremont. (Photo by D’Arcy Patrick Egan)

Edna Hansen is a woman of many talents, from mathematical and musical to her steady hand as treasurer of the city of Port Clinton, keeping a sharp eye on the finances of the city for 18 years.

Hansen will officially retire on Friday, Dec. 31. On Saturday, Jan. 1, Joe Brenner, the Managing Partner at Soderberg and Brenner CPA in Port Clinton, will be sworn in to the post.

“It’s been a wonderful job for so many years, but at the age of 84 it is finally time retire,” said Hansen. “The high point of all these years has been working with the wonderful people at City Hall. We have so many people who care about the community.”

Hansen also taught orchestra and marching band at Port Clinton High School for a long time. Her son, Bruce Hansen, who is retired Air Force and lives in Sacramento, Calif., and daughter Linda Overstreet of Fremont, are also teachers.

Throughout her career, Hansen has always stepped up to help on various committees with many groups and organizations, especially when finances were involved. She was the Executive Administrator of the National School Orchestra Association, later serving as its treasurer. She received the Traugott Rohner Award for Distinguished Service to the National School Orchestra Association.

Born in Marietta, Ohio, Hansen attended Capital University in Columbus, before teaching in Sandusky and Port Clinton for a couple of decades. Her late husband, James, grew up in Port Clinton, and worked at NASA Plumbrook as an instructor, “working on missiles and stuff,” she said.

Hansen’s financial expertise was welcomed by local, state and national groups. A District Director of the Ohio Federation of Women’s Clubs, she was assistant conductor of the Port Clinton Community Band, and directed two choirs for St. John Lutheran Church, assisting ministers at services.

Small in stature but a bold presence in the community, Hansen dared herself to do something 40 years ago that few women of the time would attempt.

“I wanted to learn to fly an airplane. I didn’t know any women pilots, so my husband, bought me an airplane ride for my birthday. I was hooked.”

Hansen went back to the Port Clinton Airport and told them she wanted to learn to fly.

Hansen was also named a Top Ten 99s Pilot in the Ninety-Nines and relished her many Ohio travels by air, but hasn’t renewed her pilot’s license in quite a while.

Hansen’s husband was also a Ward Three councilman in Port Clinton, and in 2003 the city was in need of a treasurer. With her stellar financial background, Hansen decided to toss her bonnet into the ring. On Dec. 5, 2003 she was elected to a post she would hold for 18 years while fostering financial stability and leadership at City Hall.

Hansen was even the publicity chairman for the town’s Fourth of July celebration one summer, said her friend, neighbor and fellow Port Clinton official, Ward Three Councilwoman Margaret Phillips.

“Ever know someone who is always there to help when others delay?” said Phillips. “Or someone who can handle 10 tasks without being reminded to finish something? Or will fill a spot when a replacement is needed?

“I thoroughly enjoyed working with some outstanding officials and great mayors throughout the years, except perhaps for one of them,” said Hansen, with a laugh.

“I’ve been delighted to watch Port Clinton grow over the past three or four years, as council members and city officials team up to rejuvenate the city’s infrastructure and status as a beautiful Lake Erie port town.”