A Mile of Money? 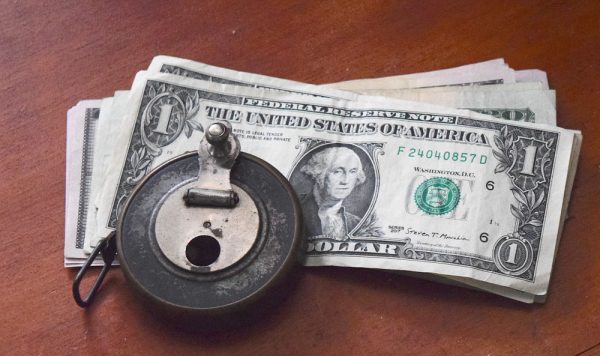 A donation to a Mile of Money will help Port Clinton put on its gala fireworks show this year on the Fourth of July. (Photo by D’Arcy Patrick Egan)

Port Clinton City Hall officials are eager to put on a Fourth of July fireworks show at Waterworks Park again this summer. In order to finance the extravaganza, they’re passing the hat and asking for donations that duplicate a Mile of Money.

Dollar bills, that is. Greenbacks.

To come to that conclusion, Mayor Mike Snider pulled out his adding machine the other day, and a ruler. He measured the length of a $1 bill, which stretches exactly six inches. Punching in the numbers, he discovered a mile of dollar bills would be 5,280 feet, a very nice stack of bills that bear George Washington’s smiling face and would total $10,560.

Community-minded fireworks fans making donations can win prizes with donations of $10 or more in the city’s Rockets Red Raffle. Donate in person or by mail to the Port Clinton Chamber of Commerce, 110 Madison St., Port Clinton 43452, or visit OneMileOfDollars.com.

The prizes range from a $250 gas card from the FriendShip Food Stores to a pair of Jet Express Season Passes for 2022, $100 in Ohio Lottery scratch-off tickets from Pat’s Party Mart, and a hot, fresh pizza every month for a year from The Brickhouse.

Top prizes are a dinner for four at a Port Clinton restaurant of the winner’s choice, with Mayor Snider as the celebrity waiter; and VIP seating for up to eight people at the Port Clinton Fourth of July Gala Fireworks Show at Waterworks Park.