A wedding behind masks was magical at Riverview 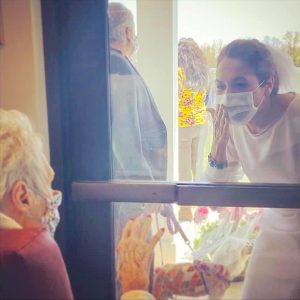 Port Clinton native Kelley Kurtz and Camilo Rayo were married recently with Kurtz’s grandmother, Dorothy Kurtz, a resident at Riverview Healthcare Campus in Oak Harber, watching the ceremony through the large windows of the nursing home because of COVID-19 restrictions.

Kelley Kurtz has been a legislative aid in Washington, D.C. since graduating from Port Clinton High School in 1989. When she came back to visit family a while back, her grandmother, Maria Riojas, set her up on a blind date with a restaurateur in town.

Mexican-born Camilo Rayo, who co-owns the successful Mexican restaurant Casa Las Palmas in Port Clinton, and Kurtz soon became engaged. They decided to marry around Easter in the chapel at Riverview Healthcare Campus, where Kelley’s paternal grandmother, Dorothy Kurtz, 99, was a resident.

COVID-19 closed Riverview Campus to visitors, though, and Dorothy was in declining health, putting her in hospice care in early May. Kelley Kurtz was a whirlwind, making a wedding happen in just three days with copious amounts of assistance from Nurse Jodi Mittower at Riverview.

With family and friends gathered on the outside porch at the new Hartford on the River facility, Kelley and Camilo were married as her grandmother watched through a large glass door. Kelley said her grandmother could not only see the ceremony, despite her ill health she clapped at the end.

“What a beautiful day it was for a wedding,” said Kelley.

In her early years in Washington, Kelley Camilo worked for Paul Gillmor, a U.S. Congressman from 1989 to 2007. After Gillmor died, she worked for long-time Congressman Harold Rogers of Kentucky.

“I’ve spent 25 years on Capitol Hill, and I plan to continue to work in the Capitol and spend as much time as I can with Camilo and family here in Port Clinton,” she said. “Port Clinton was a wonderful place to grow up, and I know it will be a terrific place to settle down.”