A Yard to Play In: Oak Harbor opens Barkyard 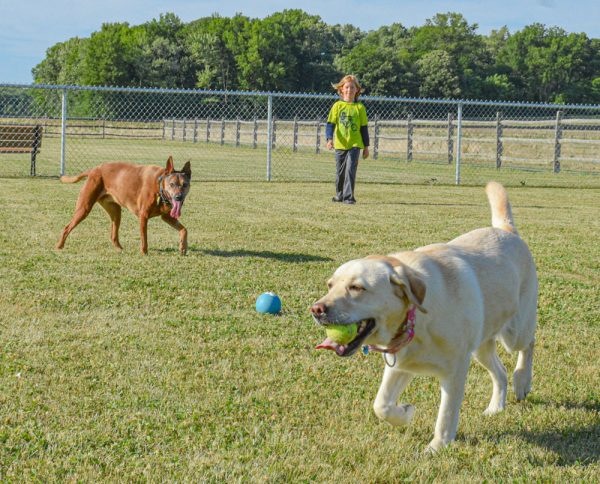 Lily, a yellow lab, enjoyed her first run at the Veterans Park Barkyard. She visited the park with her owner, Matthew Kreager, and his children, Elsie and Philip Kreager.

Although Matthew Kreager of Oak Harbor takes his dog, Lily, on frequent walks on a leash, he was hoping to find a location where Lily could run untethered. Kreager discovered a place for Lily to play, burn off energy, and socialize with other dogs at Oak Harbor’s new Veterans Park Barkyard at Veterans Memorial Park.

Oak Harbor Mayor Quinton Babcock and other village dignitaries hosted a ribbon-cutting ceremony at the park on Thursday, June 30.

“I think it’s great,” Kreager said of the Barkyard. “It’s a different kind of play than when you have them on a leash.”

Babcock said he received many requests to place a dog park on the village’s priority list. Once planning began, it was “a fast-moving project,” supported by funding from the Village of Oak Harbor, Oak Harbor Development Group, and a $1000 Ottawa County Community Foundation (OCCF) grant.

The park features separate play areas for big and small dogs, double-gated entries with buffer vestibules, picnic tables, benches, and a dog waste bag dispenser. Babcock said the village plans to purchase another set of benches and an additional bag dispenser with the OCCF grant. If more grant funding is obtained, agility equipment will be added.

As a member of Oak Harbor Village Council, Jackie Macko was happy to be a part of the team creating the Barkyard. As a dog owner, Macko is thrilled to have a dog park close to home. 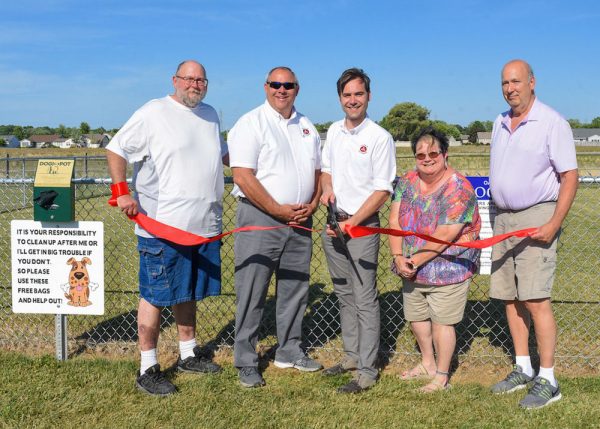 “I take my dog to Route 269 or Hopfinger Zimmerman Park. Those are great, but they’re not convenient. We had all this space, so why not use it?” Macko said. “It’s quiet here. I bring things to occupy myself. It’s great for the dogs and the owners.”

Cody Peters of Oak Harbor heard about the ribbon-cutting and brought his dog, Mac, to play with other dogs.

“The park is awesome,” Peters said. “I take her to places like Rural King to socialize, but this is better.”

Those kinds of comments about the park have been pouring into the village office.

“We’ve had very positive response. There has been a ton of interest, a ton of people excited,” Babcock said. “We wanted to make sure every dog has a yard to play in.”