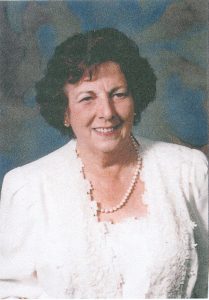 Agnes Catherine Kocour, 93, of Catawba Island, passed away on Wednesday, Oct. 7, at Magruder Hospital, Port Clinton. She was born on Aug. 1, 1927 in Cleveland to Andrew and Sophie (Hlebak) Mikolay.

Agnes (Adge) was a 1945 graduate of John Adams High School in Cleveland. She was employed with Riverview Industries for 19 years and worked in a group home. She enjoyed crafts, flowers, plants, camping, the Marblehead Halupki Festival and Cedar Point. Most of all, she enjoyed spending quality time with family and friends. She was nominated for “Mother of the Year” in 1986 through Good Housekeeping Magazine. She was a parishioner of Immaculate Conception Catholic Church where she was also a member of the Rosary Alter Society. She was also a member of the Ohio Child Conservation League (OCCL) through the Rutherford B. Hayes Memorial Fund. Agnes was an accomplished seamstress and made four bridesmaids dresses for her daughter’s wedding in 1977. She also made a Christening gown used by many of her grandchildren.

On April 19, 1947, Agnes married James J. Kocour in Cleveland and he preceded her in death on Oct. 21, 1993. Together they had six children; daughters, Jeanne Uehlein of Fostoria, Gail (Paul) Prachniak of Lincoln, R.I., Diane (Alan) Krowka of West Springfield, Mass., Marie (Dale) Metcalfe of Mansfield, Rosalind (Philip) Gase of Tiffin and James Kocour who died on Feb. 12, 2014. Also surviving are 14 grandchildren, 19 great-grandchildren, four great-great grandchildren, and a brother Richard (Nancy) Mikolay of Brecksville.

Per the state mandate, facial coverings are required and social distancing is appreciated.

Visitation will be held on Wednesday, Oct. 14, at the Gerner-Wolf-Walker Funeral Home, 216 Washington Street, Port Clinton, from 9 a.m. until Prayers at 9:30 a.m., followed by a Memorial Mass of Christian Burial at 10 a.m. at Immaculate Conception Catholic Church, 414 Madison Street, Port Clinton, with Father Jonathan Wight celebrating. Mass will be livestreamed on Facebook and later available for viewing through the Gerner-Wolf-Walker website. Burial will follow in the Catawba Island Cemetery. Memorial contributions in memory of Agnes may be given to the Immaculate Conception Church or the Humane Society of Ottawa County. Online condolences may be shared with the family at www.walkerfuneralhomes.com.