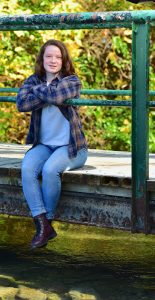 Each Fall season Dackermann was a dual sport athlete, competing in Tennis and Cross Country. She was part of the Sandusky Bay Conference Championship Tennis Team and received individual league honors during her junior and senior years.

Dackermann was the 2020 Tennis Team captain, and received the silver racket award her junior and senior years. As a Port Clinton High School diver, she set a goal as a freshman to qualify for the state diving meet all four years. She accomplished that, along with placing 12th as a senior. She was also 2020-21 team captain, SBC diving champion in her junior and senior years, and helped the swimming and diving teams earn two SBC championships.

Dackermann participated in track for three years and was a district qualifier in the pole vault.

She has been a four-year member of Port Clinton Leadership Council, part of the OASL committee, National Honor Society, and the Lead Like a Redskin program.

Alaina is the daughter of Paul and Jenifer Dackermann. Next year she will pursue a degree in Journalism at Ohio University’s E. W. Scripps School of Journalism and minor in political science.