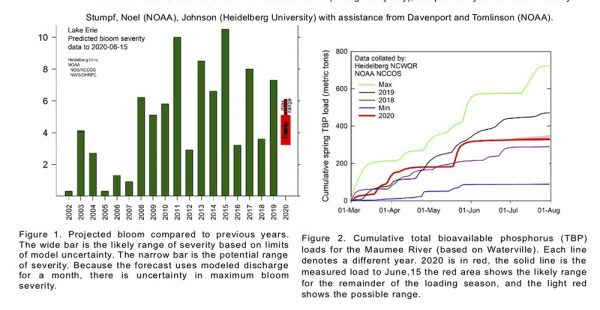 Less rainful during the spring season has translated into a smaller harmful algae bloom (HAB) forecast on Lake Erie this summer, predicted the National Oceanic and Atmospheric Association. Scientists will also get a better read on this year’s HABs with a new system using satellite imagery to produce and estimate daily microcystis bloom locations and provide a 5-day forecast for bloom movement.

NOAA will issue a seasonal forecast on Thursday, July 9 during a virtual conference available to the public from Ohio Sea Grant’s Stone Laboratory on Gibraltar Island on Lake Erie. The typical HAB season runs from July to October.

NOAA predicts on a scale of 1 to 10, a bloom this year with a severity between 3 and 5. Last year’s HAB was 7.5. Laura Johnson of the National Center for Water Quality Research at Heidelberg University, released the projections, but reiterated that it does not reveal much about the toxicity of the bloom.

Researchers examined phosphorus loads from the Maumee River to determine the size and severity of the bloom. Johnson said that with drier ground and fewer rainfall events during the late spring, less water is expected to make its way from the river into Lake Erie.

The NOAA HAB Team has released news of an upgrade in HAB reports for this season. The forecast has been enhanced by the integration of a 3D hydrodynamic model using recent satellite imagery combined with enhancements for improved data visualization.

A dashboard of interactive web maps now displays, according to NOAA, an animated bloom position forecast; recent satellite imagery in true color and chlorophyll index; a forecast of lake water temperature, currents and wind speed; modeled bloom positions in near-real time; and plots for the vertical movement of microcystis at select sampling locations.

Once a bloom develops, an email is sent to subscribers on Monday and Thursday when the Forecast Analysis is updated on the website. Users can email questions and comments to hab@noaa.gov.