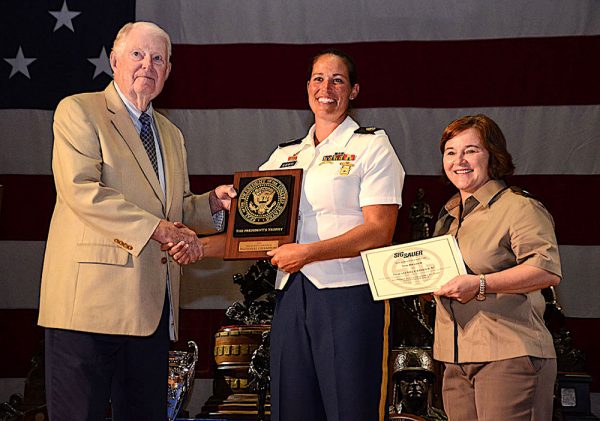 Amanda Elsenboss was handed her President’s Rifle Match Award by Gary Anderson, who has won the match more than any other competitor, and Pennsylvania National Guard Deputy Adjutant General BG Lauran McHugh, who came to Camp Perry to present it personally to Elsenboss.

Amanda Elsenboss, 33, of the Army National Guard, made history at Camp Perry’s National Rifle and Pistol Matches. Her victory was the first overall win ever by a female in the prestigious President’s Rifle Match, an event that’s been in existence since 1894.

Fired on Monday, Aug. 1 as part of the Civilian Marksmanship Program’s (CMP) National Rifle Matches, the President’s Rifle Match is one of the most popular and esteemed events of the year in the United States. The top 100 scoring competitors are dubbed the praiseworthy President’s Hundred, with the overall title regarded as an enormously honorable feat.

“This has been a long time coming – everybody thinks of the President’s Hundred Match,” said Elsenboss, looking back on her own career.

She’s been a recognizable force on the firing line for years and, incidentally, a champion for female athletes. Having started in marksmanship at 13, Elsenboss had already made history in her career, as a junior, when she and Connecticut Palmer teammate Julie Coggshall became the first all-female winners of the Whistler Boy Junior Highpower Rifle Trophy at the 2006 National Matches.

She went on to join the Army in 2009, where she was assigned to the U.S. Army Marksmanship Unit (USAMU). There, she collected several remarkable titles, including national wins in service and long range rifle. At the 2021 National Matches, she set a new national record score and was the overall individual competitor of the National Trophy Team (NTT) event – netting a near unbeatable score of 500-34X. 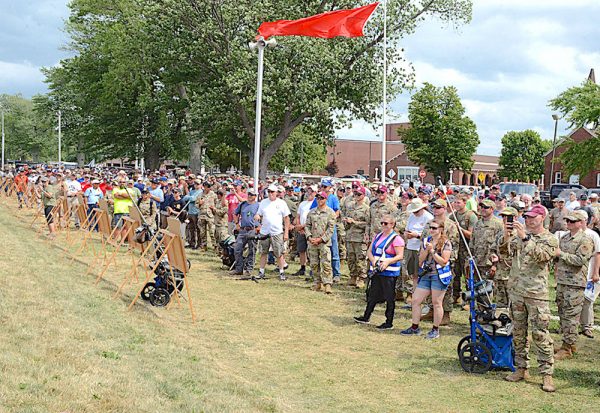 A large crowd of spectators were present to witness history in the making at the President’s Rifle Match shootoff.

Last year’s National Matches was also her first as a member of the National Guard All Guard Marksmanship Team, which she joined in 2019. While on the team, she has experienced many tests on the firing line, and the 2022 President’s Rifle Match was no exception.

This year’s President’s Match was full of challenges. Heavy winds arrived and swayed throughout the day, provoking each competitor’s ability to adapt to the changing conditions. Somehow, Elsenboss managed to reach a preliminary score of 297-9X – dropping only one point each in standing and prone positions. 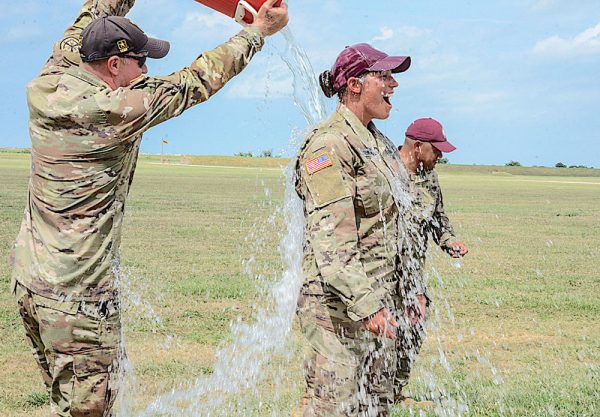 Amanda Elsenboss was given a traditional President’s Rifle “bath,” often bestowed upon the winner.

“I shocked myself by shooting 99’s everywhere, and I owe it to my teammates and the other competitors on the line who let me ask them what wind they were using,” she said. “The camaraderie between all of the competitors is so large that no one’s going to try to hurt you. Everyone’s looking out for you. And that makes a difference.”

Next, she would head into the President’s Match 20-person shootoff – fired after the qualifying round from the day’s course of fire. Elsenboss had participated in the shootoff multiple times before, finishing in 20th place and higher, but this year was her first starting in the lead position on the line. Remarkably, she wasn’t nervous for the shootoff, despite the match rarely seeing the competitor in first position ending in the same place.