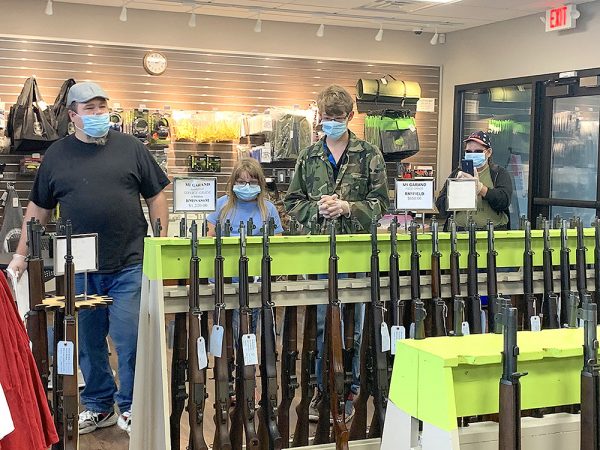 PORT CLINTON – Ben Garlich of Garrettsville, Ohio, knows the value of hard work and patience when it comes to long-term ambitions.

At only 15, Garlich has already been involved in several community service endeavors, and often recognized as the one to beat at annual food drives. This summer, he achieved a goal that began last year with a friendly gesture and soon transformed into a passion that will last him a lifetime.

“Coming from a family of both veterans and shooters, I’m happy my son is taking an interest in both the history and the hardware that got us here,” said Chris Garlich, Ben’s father.

On July 16, Ben, Chris, as well as Ben’s mother, Kim, and sister, Alex, took a visit to the Civilian Marksmanship Program’s (CMP) North Store, where Ben held in his hands for the first time the item he had worked tirelessly to earn – his very first M1 Garand rifle.

The young shooter has always had a broad interest in American history. As he’s grown, he’s become especially interested in World War II from playing the “Medal of Honor” series of video games, which is originally set within that era.

When his interest was piqued by the game, he began watching and reading everything he could relating to the war and the surrounding culture of that period. Ben and his family have even traveled to the Conneaut, Ohio, D-Day reenactment several times. The annual event, held since 1999, features over 1,500 living history reenactors to create a realistic and educational depiction of the D-Day Normandy invasion, while also illustrating life in Allied and Axis encampments.

Garlich’s family is filled with hunters, shooters and military members, so his interest in World War II has primarily focused on firearms, specifically the rifles and machine guns of that time.

Military heroes bred within the Garlich family include Kim’s grandfather, who served as a sergeant in the Army, and her father, who was a member of the Air Force. Chris Garlich is a former member of the U.S. Navy, and his father came from an Army background – both using M16 rifles while enlisted, with Chris Garlich ending his service with an M4.

Chris Garlich’s grandfather, also named Benjamin Garlich, served his country in the Army from 1939 to 1945 with his trusted M1 Garand by his side.

Though they would have liked to have kept the M1 used by Chris’s grandfather during his service, it is, sadly, gone forever. In a story passed down, it’s said that Chris’s grandfather and many others threw their gear, including their rifles, into New York Harbor once back in America.

Fortunately, though temporarily lost, the M1 found its way back into the Garlich family after a trip to the range and the kindness of a neighboring gentleman.

“We shoot often, and last year, someone let Ben Garlich shoot an M1 at the range we go to,” Chris explained. “We were shooting our own rifles, and Ben was eyeballing the M1 in the next lane.”

The man at the range asked Ben if he wanted to give the rifle a try, and, of course, he did. After a quick lesson on loading and avoiding “M1 Thumb,” he was handed the rifle and several clips, then told by the man, “Knock yourself out, and watch your thumb!”

After taking a few shots, Ben was quickly hooked, and he soon gained the desire for an M1 of his own.

“I told him if he saved up the money, I’d buy it for him,” Chris Garlich said.

With his father’s word, Ben got to work cutting lawns, doing odd jobs and helping to build a garage to earn money toward his rifle. He even displayed strong self-control – spending very little of his earnings and saving it all for the rifle he deeply wanted.

The family had already planned a summer fishing trip to the Port Clinton area, which happens to be where the CMP North Store is located. Though Ben didn’t quite reach the full amount he needed for the rifle, with the scheduled fishing trip drawing near, his parents decided he had worked hard enough and chipped in the remaining amount. They even decided to take Ben into the store so he could pick out his own rifle, instead of mailing in an order later in the year as they had originally intended.

Six weeks before the two-hour trip west, the Garlich family called and made an appointment at the CMP North Store on the grounds of Camp Perry.

“Ben was particularly impressed by “the old guy” behind the counter – also known as CMP Armorer Bob Bell, who often shares his wealth of Garand knowledge with customers. Bob has worked at the CMP North Store for the past 14 years, assisting customers with their questions and making sure each customer leaves with their ideal hand-picked treasure.”

During his visit, Ben was also handed a special CMP coin. Since Ben is a collector of coins, most he has purchased on his own, receiving one as a gift from the place he picked out his first M1 Garand was incredibly special, he said.

Ben has already shot his new M1 and plans to use it quite a bit in future years. Making it his own, he has gone through and stripped it, lubed it and has put two coats of tung oil on the stock. Over and over, Ben has locked in an empty clip and racked the op-rod just to hear the “PING!” the rifle makes as the clip ejects.

Now that he’s able to tangibly embrace a relic from the history that has fascinated him for so long while also bridging a family connection of his great-grandfathers before him, Ben is eager to collect even more pieces from the World War II era and may even try competitive shooting one day.

“I guess it’s fitting, after 75 years, that another Benjamin Garlich take up the M1,” Chris said. “I’m going to do what I can to foster his interest in history, try to instill the same love of hunting, shooting and the outdoors that my grandpa and dad did for me, and see if he shows any interest in service rifle matches.”

To learn more about the CMP North Store and all of the CMP Store locations, visit the CMP website at https://thecmp.org/cmp_sales/cmp-stores/.