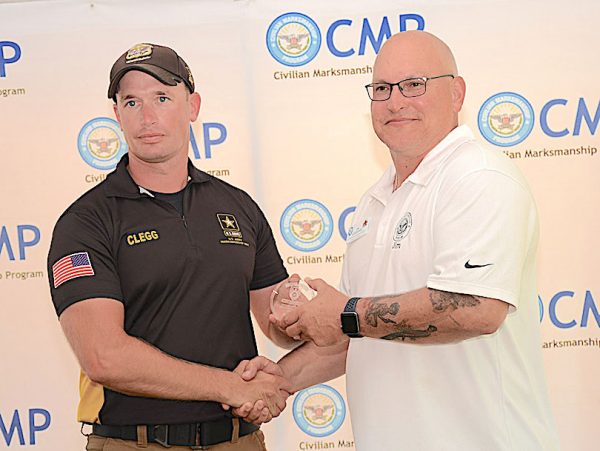 CAMP PERRY – Starting off the highly anticipated return of the National Matches at Camp Perry with a collection of impressive achievements, SSG Carl Clegg, 35, of the Army Marksmanship Unit, gave consistent notable performances to lead overall during the Any Sight portion of the challenging Pistol 2700 Aggregate event. Clegg tallied a total score of 2648-114X in the match.

The 2021 National Pistol Matches were fired July 12 through July 18 on the grounds of the historic Camp Perry National Guard Training Facility just west of Port Clinton. Over 3,700 entries were seen throughout the annual event, which featured competitions never before held on the pistol series schedule – including numerous aggregate opportunities.

For a complete list of results, visit the CMP Competition Tracker page at https://ct.thecmp.org/21nmpistolresults.

Conditions throughout the National Pistol Matches were what was expected by those familiar with the unstable environment often found at Camp Perry. Gusty winds and bouts of precipitation greeted competitors on the firing lines, with sunshine and heat also making appearances through the week.

Shue landed only four points behind Clegg for second overall in the Any Sight event and is a past winner of some of the most honorable events of the National Matches. He found several successes at the 2021 event, like earning High Civilian of the Pistol 2700 Aggregate, leading the Civilian class of the Center Fire 900 Aggregate and helping to claim multiple team competitions.

In addition to success within CMP events, Shue was also the High Aggregate winner of the inaugural Triple Crown Match, led by the Ohio Rifle and Pistol Association. The match was held over three Ohio-based venues: The Cardinal Center in Marengo, the Canton McKinley Rifle Club in Canton and Camp Perry in Port Clinton.

For accumulating his score of 7944-425X, Shue received a prize of $2,250 and the Pardini Trophy. Various individual awards were also presented, including High Senior, High Junior and High Woman, among others. View the entire list of Triple Crown winners on the Cardinal Center website (https://www.thecardinalcenter.com/shooting-center) or the Ohio Rifle and Pistol Association website (http://www.orpa.net/).

Additional category titles were presented to leading competitors of the match, including the High Senior, High Law Enforcement and High Civilian.

For a complete list of results, visit the CMP Competition Tracker page at https://ct.thecmp.org/21nmpistolresults.