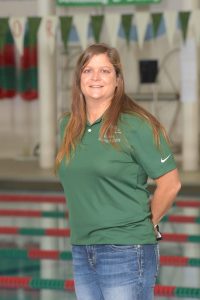 Over more than 18 years, Andrea Sorg has built strong swimming programs that consistently compete for league titles and regularly makes noise in the postseason.

Last season, the Rockets won their first district championship in school history, an even more impressive feat when you consider the history of the program and its incredible success, both recently and in the 1990s.

“This is obviously a great honor. The honor to work in the same community for so many years and just being able to dabble in the lives of so many kids and make a positive impact on their lives in one way or another.”

It’s an honor Sorg is flattered to have.

“I was actually rather speechless when I saw that I had been recognized. To put in so many hours, day in and day out, 9-10 months per year. It covers all aspects, not just practice prep, but also character development, having those tough conversations with our athletes and holding athletes accountable,” she said.

“It means quite a bit. You feel like you’re being recognized for all of your hard work.”

Sorg, whose maiden name is Lajti, was part of four Sandusky Bay Conference teams that won four league titles for legendary coach Bob Van Horn, and sent a bevy of swimmers to the state tournament in Canton.

“Because of my experiences as an athlete, I can relate to my athletes as a coach,” she said. “You think back to language that was used with you to explain something with respect to plays in softball and technique in swimming. I use that and reach back and use that with an athlete.

“I went to state, so I experienced those things. A trip never felt complete until we got to Canton. When I finally started having groups get down to Canton consistently, I thought, let’s go and do something while we’re there. That paralleled my experience as a swimmer. That’s the kind of thing that keeps you going as an athlete and a coach.

Sorg, a ’99 graduate of Oak Harbor, has seen some great swimmers like Elayna Krupp and Michael Cervantes, among others, come through the program and have tremendous success.

“To influence and coach, the true reward of coaching is seeing a previous athlete as an adult that’s successful in life with their job or family. Seeing them go on and become successful members of society.

“If I’m lucky, I get messages from them back and forth now and then. I bump into them and have good conversations with them.”

Sorg, who is a Graytown native, learned important lessons from her parents that she carries with her today.

“My parents have a work ethic that is unparalleled. My dad drove a semi truck for I don’t know how many years, and he was a farmer, too. He was consistently working, fixing equipment. “My mom was a part of that, too,” said Sorg. “They were constantly working to support the family and, on top of that, we have a garden. We were helping in the yard as kids, and working with our dad on fixing equipment. They taught us that anything worth doing is worth doing 100%. I think that was instilled within me watching my parents work so hard.”