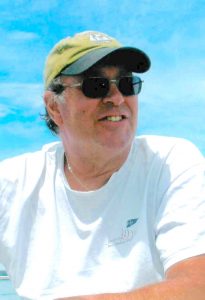 Andrew S. Wilson, (Andy) 68, died Wednesday, Sept. 18, 2019, from sudden cardiac arrest, at his home in Milbridge, Maine. Andy was born March 3, 1951, in Detroit, Mich., and became a full-time resident of Milbridge in 2009. However, he had been a part time resident and visitor from 1967. He was a retired Senior Consultant (project engineer), employed by Davis Besse Nuclear Power Station in Oak Harbor, Ohio from 1984-2007. Andy was a passionate citizen of Milbridge and was the town tax assessor from 2012-2018. Andy was a member of the Milbridge Historical Society, and Commodore of the Petit Manan Yacht Club (2017-2019).

Andy was a 1973 graduate of the University of Pittsburgh, an avid sailor, lover of all things water, and enjoyed spending time at his home in Milbridge. Andy enjoyed watching the growth and rejuvenation of downtown Milbridge, as well as spending time with local friends and neighbors. The first to put his boat in and the last to take it out of the water, Andy was always ready for any sailing adventure. He will be dearly missed by family and friends.

He was preceded in death by his father, Rev. Donald C. Wilson, and his mother, Barbara Fitch Wilson Rowen.

A private memorial service will be held to remember and celebrate Andy’s life. Arrangements are under the direction and care of Bragdon-Kelley Funeral Home, Milbridge, Maine.

Contributions in memory of Andy may be made to Hospice & Community Care, Lancaster, 685 Good Dr, Lancaster, PA 17604, or to the Gateway Milbridge project, at http://www.milbridgetheater.org/

“Believe me, my young friend, there is nothing – absolutely nothing – half so much worth doing as simply messing about in boats.”
– Kenneth Grahame, The Wind in the Willows