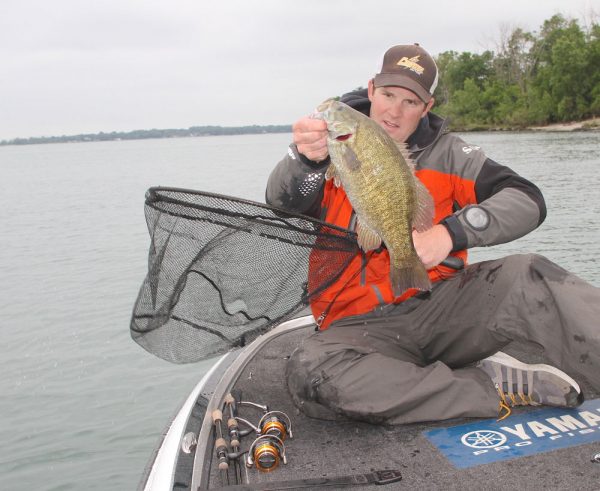 Angler surveys are underway at many of Ohio’s popular public fishing locations, including eight creel clerks on Lake Erie and the Sandusky and Maumee rivers. Lake Erie guide Michael Simonton knows how to catch trophy smallmouth bass around the Lake Erie Islands, and to protect the population insists on releasing all the bass he and his clients catch. (Ohio Division of Wildlife)

Angler surveys are underway at many of Ohio’s popular public inland waterways and Lake Erie, according to the Ohio Department of Natural Resources (ODNR) Division of Wildlife. Information collected during the annual angler survey is crucial to maintaining and improving the quality of Ohio’s public fisheries as well as fishing opportunities.

Eighteen creel clerks will be gathering information in 2022. Six are based on the shore of Lake Erie, two on the Maumee and Sandusky rivers, five on the Ohio River, and five at inland reservoirs. Lake Erie surveys are ongoing until October; surveys at inland reservoirs run until November, and along the Ohio River until the end of the year. Historical surveys reveal that Ohio’s most popular species to target include walleye, yellow perch, largemouth bass, smallmouth bass, trout, saugeye, sunfish, crappie, and catfish.

In addition to estimating populations and setting fishing regulations, information gleaned from inland waterways is critical to understanding the success of stocking programs. Angler satisfaction and preferences information help fishery managers effectively allocate where, when, and with what size and species of fish to stock.

Most creel clerks are current college students or recent graduates with a background in fish management or related fields. Several former creel clerks have advanced their careers within the Division of Wildlife. If you are interested in working as a clerk in the future, check out seasonal job opportunities at wildohio.gov.

The Division of Wildlife is responsible for conserving and improving fish and wildlife resources in the Buckeye State. Follow the Division of Wildlife on Facebook for instant news stories, outdoor recreation ideas, and so much more. And download the HuntFish OH mobile app to easily purchase and display licenses, view regulations, and find new outdoor recreation locations.