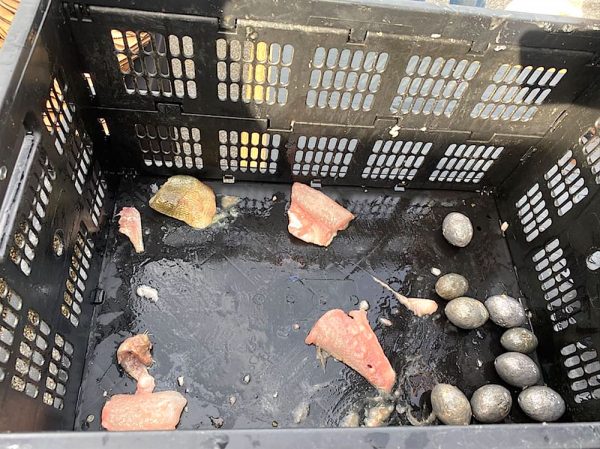 A photo of a plastic milk carton containing the lead egg sinkers and pieces of walleye flesh Jake Runyan and Chase Cominskly used to cheat in the Lake Erie Walleye Trail Championship on Friday Sept. 30 were provided by Tournament Director Jason Fischer.

Runyan and Chase Cominsky of Hermitage, Pa., had won copious amounts of money, including a $150,000 boat, in the walleye derbies, the Walleye Slam and the Fall Brawl, both getting ready for their six-week derbies in October.

Runyan and Cominsky won’t be competing on Lake Erie any time soon.

The pair were discovered cheating on Friday, Sept. 30 while onstage at the Lake Erie Walleye Trail Championship in Cleveland Harbor. The last two-angler team to check in the 30-team field, Tournament Director Jason Fischer demanded to take a closer look at their limit of five walleye.

“I knew right away that something was wrong,” said Fischer in a telephone interview. “The five fish weighed more than 33 pounds. Looking at their size, they weighed about 10 pounds more than their lengths would suggest. When I ran my hands down the fish, I could feel something hard in the first walleye’s stomach.

Fischer called for a knife, and quickly slit open the fish’s belly. Two large lead egg sinkers were plucked from its stomach, and bits of walleye flesh to keep the sinkers in place.

“We’ve got lead in here!” barked Fischer in a video that has already been beamed around the country and back again.

Fischer immediately directed Runyan, who was weighing the fish in, “You’re out of here,” sending him scurrying for boat and trailer. Sheepishly, Runyan followed his directions, and for good reason. An angry mob of fishermen wanted to take out their frustration on the pair.

Lead weights were discovered in each of the five walleye. By a team that had won an unprecedented three straight LEWT tournaments this year. And the two walleye derbies in 2021. They had only failed one polygraph test in all of that time.

Fischer, a policeman in the Cleveland area and a former tournament angler, contacted the Ohio Department of Natural Resources and subsequently

It was such a rare form of cheating that even veteran anglers could not figure a way to do what they’d done, especially on the rough waters of Friday’s fishing day on Lake Erie. One wily veteran said it was a blatant way to cheat, because the gear needed to cheat had to already be on the boat.

“They had obviously done it before, and were ready to cheat again,” he said. In interviews, none of the anglers wanted to be mentioned in the same breath as Runyan and Cominsky, even their few former fishing friends.

On Monday, according to Associated Press, Ohio Department of Natural Resources officers gathered evidence from the tournament and were preparing a report for the Cuyahoga County Prosecutor’s Office.